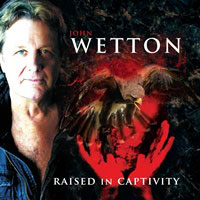 Between all of the touring and recording commitments for Asia these days, it’s quite appealing to know John Wetton still has the zest and fire in his soul for rock music. One of the all time greats in the progressive rock and AOR field, his work with King Crimson, Roxy Music, U.K., and Asia is quite a vast and varied discography. For “Raised In Captivity”, John partners with Billy Sherwood and a host of featured guitarists, keyboardists and singers he admires on this sixth solo studio sojourn.

The peppy “Lost For Words” has reference points with John’s 70’s musical past along with a slightly progressive meets The Police riff framework and some killer guitar lines out of Steve Morse. “The Last Night Of My Life” is another uplifting, power rock song, John sustaining some of his higher Asia-like melodies while the main passages almost veer into classic Men At Work parts. My favorite song happens to be the concluding ballad “Mighty Rivers”, accentuating the richness of Anneke Van Giersbergen and John Wetton with their sterling, epic voices against the backdrop of keyboards, classical instrumentation and a moving, less is more guitar solo that mirrors the arrangement.

When you gain solid contributions from Robert Fripp, Steve Hackett, Mick Box and fellow Asia compatriot Geoff Downes among others, it’s so much easier to take your writing vision and have it developed into the best sonic outcomes. As much as you have the straightforward melodic rock we’ve come to know and love from Mr. Wetton on these 11 songs, you’ll also get a couple of progressive rock nods in “The Devil And The Opera House” and the fierce title track that really makes this album very much a self-portrait of the history and depth of this man’s abilities.

This may be one of those sneak from behind releases – on the surface you may think it’s just very standard and straightforward, but give this 5-10 full listens and “Raised In Captivity” sinks its teeth deep into the human psyche.