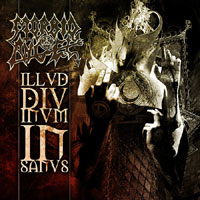 "Illud Divinum Insanus" must surely be one of the most eagerly awaited Death Metal releases of recent years. It marks the return of David Vincent after an absence of a decade and a half and is the band’s first output in eight years. Not only that but it is the first official recording without Pete Sandoval, the bands first offering for Season of Mist and of course the first outing with new axeman Destructhor. So of course, interest in the album was sky high before the earliest reviews started to come in and we began to notice a marked split in opinions. "Illud Divinum Insanus" was bound, then, from the very outset to court controversy and dissent…

The album opens with "Omni Potens", a short (and dispensable)  instrumental intro before we get down to business proper and as second track "Too Extreme!" blasts from the speakers, we get an inkling of what the fuss is all about. While the syncopated, chugging rhythm reminds us of something from the excellent "Gateways to Annihilation", it is obvious that an industrial influence has crept in… and the lyrics… "…We are your new religion". Not the most convincing opener.

Next up is "Existo " This is straight forward Morbid Angel death metal, but completely forgettable in every other regard. After I hear it, I forget it straight away and have no compunction to ever listen to it again. Thank the Gods of Insanity that Trey pulls off a short but killer solo! Track four "Blades for Baal" is much closer to what I had hoped for from this album. Again, it is classic Morbid Angel and once again Trey (I presume it is him – sorry Destructhor) pulls off a classy solo.

"I Am Morbid" comes next.  This slow to mid-paced affair is probably best described as stadium rock, Morbid Angel-style, with crunching, chanting choruses that remind you of a crowd response part at a festival. The problem with this song is its apparent simplicity – it is the kind of song you could hear once and discount as sub-standard. However, it is probably the most dynamic song yet on the album and the structures are intelligent and effective. Again, the crawling riffs and pyrotechnic soloing stand out on a track that is, in short, much stronger than appears at first.

Track six: "10 More Dead". More mid to slow death metal, a la "Where the Slime Live". At this stage things are going pretty well for "Illud Divinum Insanus" and most listeners would probably feel that while it isn’t the most outstanding Morbid Angel album, it certainly isn’t deserving of the slew of negative reviews it received and the negative press it received, especially from the New World.

Then comes "Destructos VS the Earth / Attack". This has a much heavier industrial feel than probably anything that Morbid Angel have done to date and has been one of the primary bones of contention for those who dislike the album. It is here that I begin to see what people’s problem with this record has been. At first when I heard the track, I thought it sounded like Rob Zombie or Al Jourgensen, artists I would never listen to in a million years. My cheeks burned red with embarrassment on behalf of the guys in the band and everyone involved in the production of this album and I wanted to rip it from the stereo and Frisbee it out the window. I skipped over the remaining tracks, finding instant fault and making up my mind. The negative reviews were right! This album was shit and I never wanted to hear it again. But that is the type of knee-jerk reaction people have had to a couple of songs on this album and that is what has earned it such a backlash on blogs and websites overseas.

To be honest, it was a third party, my editor Roy, who encouraged me to look past that reaction and give the album another chance. Once I did that I found that, ok, I didn’t really like this track, but it did come after six tracks of solid, if not awesome Morbid Angel. Plus, ever since "Domination", Morbid Angel have been putting filler/instrumental/sample tracks on every release. "Formulas Fatal to the Flesh" has five of them if I’m not mistaken. It is something most of us have gotten used to (even though it does get annoying at times), but I think that this time, because the experimental part is much closer to an actual fully-fledged song that it has popped above the radar and become all the more objectionable and I think that the negative voice reached a tipping point that saw it carried forward, regardless of the fact that it was unmerited.

Track eight, "Nevermore" is back to the good stuff and will possibly be the best thing on the album for many. Once again, however, it doesn’t go all the way to pleasing. Perhaps the chorus could be stronger and Tim Yeung’s bass pedal sound is a bit too mechanical for my tastes. On the plus side, this is the first time I realized that I haven’t missed Pete Sandoval at all on this album – sorry Pete, and kudos to Tim for stepping in to what must be one of the hardest drum stools to fill!

"Beauty Meets Beast" is up next – more slow to mid-paced death metal – once again, not completely convincing except for the guitar work. Penultimate track "Radikult" is back to the industrial/dance vibe and will have most listeners diving for the ‘forward’ button. It is at this stage that I realised I miss Steve Tucker. He was always rock solid on vocals and didn’t think red rubber cycle shorts were a fashion item…

Final track "Profundis – Mea Culpa" brings the record to a close in a storm of pounding, gabba-influenced drums and I have to admit that this album is not a bad effort overall and certainly far short of the calamity many claimed it to be. Even with the most open-minded approach, songs like "Radikult" and "Destructos VS the Earth / Attack" are liable to tickle your gag reflex, but once you get past that, you find that this album is a lot more straightforward and conventional than people give it credit for. And while it is far from the strongest Morbid Angel release, there are moments that fans of the band will enjoy, and that’s as good a place as any to start.