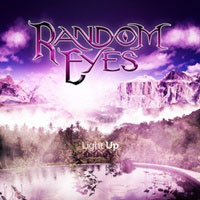 After a three year break and some lineup shuffles (new drummer, two new guitarists), Random Eyes hit the market with their third album “Light Up”. With former Adagio vocalist Christian Palin at the helm, these 10 songs are compact, to the point melodic metal numbers with a strong sense of modern/gothic sensibilities in terms of simplified hooks and radio-friendly vocal parts. Songs like “Tell Me”, vocal harmony laden “Light Up The Dark”, and the neo-classical meets staccato guitar heavy “Chaos Theory” showcase the five piece confident in expanding the boundaries of their catchy, tight sound.

Christian has a soaring upper register, not dissimilar to Stryper’s Michael Sweet or possibly Sons Of Seasons Henning Basse. Musically Random Eyes sit in that Thunderstone meets Lacuna Coil sound space – power metal with happy overtones one minute then pure gothic power pop the next. There’s nothing on “Light Up” overly complex or difficult to grab onto – the problem is, Random Eyes aren’t really doing anything novel to push themselves beyond obvious comparisons. And when they really go for the obvious groove passages in songs like “Blind Man” and “Megalomaniac” it makes you wonder if they are purposely attempting to commercialize their sound or if they truly believe the masses want watered down, safe arrangements?

Good for an occasional listen, but not sustainable enough to really hit my permanent play list. Random Eyes need to dig deeper or they will remain in the shadows.