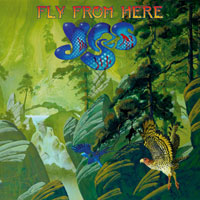 Worry creeps in when such a long standing, renowned progressive rock act such as Yes decide to put out a new studio album – their first in 10 years. Especially when vocalist Jon Anderson is no longer in the picture. This doesn’t stop Alan White, Chris Squire, and Steve Howe from continuing forward with Canadian vocalist Benoit David who previously sang with a Yes tribute band as well as an original progressive rock act Mystery. Factor in some alumni such as producer Trevor Horn and keyboardist Geoff Downes and the expectations are that these veterans are focusing solely on making a product from their heads and hearts – because what’s the sense in chasing the larger fickle populace when you can appeal to the 40 year plus faithful?

“Fly From Here” represents a crisp climate changing recording with its sights set on honoring the Yes legacy while creating a cohesive flow between the bright and sometimes tranquil melodies, the repetitive, subtle Howe guitar lines and arrangements that are still challenging, still progressive and also addictive. There’s one particular up and down series of notes that takes place in the opening “Overture” and plants itself over the course of the album, but most prominent in personal favorite “Madman At The Screens” – part 3 of the five part title track where Benoit, Howe and Downes as a trio come together as one. There are numerous symphonic flurries and spiraling guitar/bass lines where Yes recall their gloriously creative early 70’s heydays – just effortless in their chemistry and bringing “Into The Storm” to a dynamic fitting concluding crescendo.

Benoit has a smoother tone and not as helium filled as Mr. Anderson, almost approaching a song like ‘The Man You Always Wanted Me To Be” with a Crosby-Stills-Nash meets Poco harmony quality. Even when the songs are slower and somber, there’s a heavy, darker tonality with many parts of “Life On A Film Set” that those into Pink Floyd would treasure before the acoustic guitars and bright keyboards take the second half of the arrangement into normative for the group time signature travels.

The album isn’t over-bloated or wrought with excess – “Fly From Here” could be an integral part of Yes’ set-list for years to come. The pioneers knock one out of the park with this record, well worth the long wait.