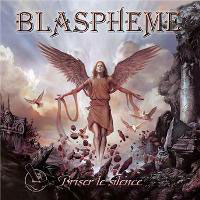 Those of you with memories longer than your hair might remember Blaspheme, an obscure French metal act that put out two full-lengths in the early to mid 1980’s before disappearing back into the wilderness. 15 years later and they’re back with third album "Briser le Silence".

The music is pretty much classic metal, with riffs reminding me at times of The Scorpions, Saxon or Dio-era Black Sabbath or Rainbow. The vocals are clean with a power metal vibe, although unfortunately the lyrics are in French. Sorry guys, but Deathspell Omega are the only band I can think of who can get away with singing in French. Maybe that’s just personal taste, but it just doesn’t work for me.

The production is big and modern, with rich guitar tones, clear bass and a snappy snare sound. There are some nice guitar harmonies here and there, but they get lost in the mix somehow and lose almost all of the impact they should have had. The keyboard sound is a bit too commercial and loud in the mix as well – it calls to mind the synth music they play in those shops that sell crystals and pictures of angels and dolphins.

The songwriting is fairly mediocre on the whole. There are some strong riffs here and there, but ultimately the power metal French vocals are a pretty big obstacle to get over. But it is up to you. If you think it is ok to sing power metal in French feel free to add 0.5 to the score above.