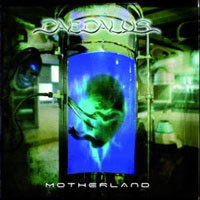 Third album from these Italian progressive metal musicians who clearly set themselves apart in their approach on “Motherland”. I tend to believe that the standard textbook recording for most Italian progressive metal bands is Dream Theater’s “Images And Words” – and too many younger bands emulate the chord progressions, riffs and virtuosity of this American act to the point of lunacy. Daedalus take their songwriting on a fresh playing field – one that doesn’t encompass pure speed and agility to impress the musician-minded and this assuredly sets the five piece far ahead of the pack with this 11 song effort.

“Until You’re Here” as an example may have hyper active cymbal work and powerful drum fill parts courtesy of Davide La Rosa, but the arrangement evens out with the comfortable mid-range palate of vocalist Davide Merletto and the real fluid jazz/progressive rock piano parts from keyboardist Sandro Amadei. “Perspective Of The Moon” opens with a series of off-time ascending and descending guitar lines and ethereal , breathy vocal melodies. Andrea Torretta really shines on this track with emotive, passionate solo work that isn’t necessarily about throwing down the most notes in an eight bar measure but evoking proper shades of color for the arrangement. Even when Daedalus go for an up tempo track like “Sand”, there’s always an element of catchiness through the keyboards, the rhythms, or the vocals while you may be impressed with the neo-classical guitar opening and guest dark vocals from Sadist’s Trevor.

Without drawing direct correlations to any specific progressive metal band, I feel that Daedalus have that same distinction as say Poverty’s No Crime or Threshold with their particular weaving of softer textures into the basis of their obvious songwriting talent. Handing the mixing duties to renowned Masterplan guitarist Roland Grapow, “Motherland” has plenty of subtleties that are necessary for enjoyment years beyond the product’s original construction. If you’ve grown leery of genre burnout, I believe this album will give you vitality for progressive metal in general.