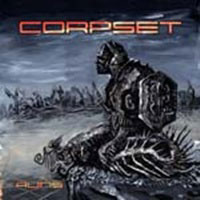 Finnish death metal five-piece who produce a debut album with nary a Children Of Bodom influence in earshot. Instead Corpset have their radar on the conventional aspect of heaviness – low, discernable growls intermixed with savage screams, down tuned guitar play and a rhythm section intent on giving these songs separation and groove at the same time. Guitarists Jari Kelloniemi and Jami Heikkala willingly throw down some cool twin harmonies against their normal mid-tempo and slower riff parts in personal favorites like “Castrate” and “Behind The Sauna” – almost crossing the lines of Testament with 90’s death metal acts like Entombed and Dismember.

I can’t really say much on “Ruins” rises above the play of their influences. The double bass parts have little life or enthusiasm behind them, and most will be able to predict the riff changes without too much trouble. Vocalist Antti Murtonen rotates between the lower growls and the metal-core screams, and I prefer him exploring more of the former and leaving the latter to the American outfits. I believe if Corpset can work more on developing some of their obvious tempo shuffling skills (evidence in “Moment Of Clarity” between the drumming and guitar parts) we could have potential in a long term career.

For a band developing their sound the better part of 5 years, “Ruins” will appeal mostly to the must have it all death metal maven. It’s average, a little by the numbers – and a case where the striking cover art will not match up to the musical proceedings.