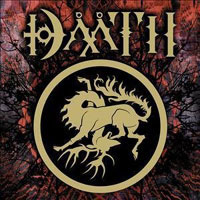 Tune the instruments, crank the amps, dim the lights, cue the music. Enter the musical mayhem that is Dååth! From the anticipation that creeps inside you at the start of “Genocidal Maniac” to the exploding madness that proceeds it, the self-titled 4th album by the American metal five-piece Dååth is a treat for anyone eager to destroy some braincells the old fashioned way: by banging it back and forth.

From the opening track “Genocidal Maniac” to the finishing touches of “Terminal Now” this album keeps up the pace with screeching guitars, growling vocals and fast paced drums. It’s heavy, brutal in its way and metal by every definition of the word. “Indestructible Overdose” is a perfect example of everything good with this album. It’s fast, spine breaking metal meant to push the boundaries of the genre to the breaking point.

Despite everything that makes Dååth’s fourth studio album a terrific addition to the metal family, anyone not completely devoted the genre will grow tired of the repetitiveness of the songs. By the time the listener gets to the 5th or 6th track they will have grown tired off the fast paced metal and craving something original. However, the clever metal minds of Dååth’s five members have considered this. The result is “Oxygen Burn”. While the brutality and speed remains, a keen ear will note how different this track truly is to its predecessors.

After “Oxygen Burn” the album displays a much larger musical originality and the songs offer more than just brutality and speed. “A Cold Devotion” and “N.A.T.G.O.D.” are perfect examples of this change. The change is even clearer on the closing track “Terminal Now”. In the world of ambient madmen from Texas (i.e. Explosions In The Sky and This Will Destroy You) the track can almost be interpreted as the death of the album. It’s ‘war music’ like opening to the instrumental silence of the middle, the track is a perfect ending to the album. It’s so different from anything else the album offers so it stands out and truly gives the listener something to remember.

All in all Dååth’s self-titled 2010 release will make the playlist and shelf’s of the portion of the population eager to suit their yearning for brutal music. Bands like Deicide and Autopsy will certainly satisfy those with a greater liking for conventional death metal, but Dååth serves as a linkage between the brutality of the past with the speed and techniques of the present.. Album highlights include “Oxygen Burn”, “Indestructible Overdose”, "Arch (Enemy) Misanthrope”, “Terminal Now” and “N.A.T.G.O.D.”.