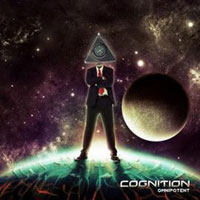 Cognition is the scientific term for the process of thought, and also a metal band from Oslo, founded in 2005. Two demos later, "Alienation" & "Apocalyptic", and its time for the debut album, "Omnipotent". According to the band, the core concept of  the album deals with the idea that you are in charge of your cognitive processes and how you ultimately choose your surroundings. In a sense you are Omnipotent, because you live in the world you see, and we all have our own experience of this world, and if you don’t like what you see, you can choose to manipulate your perspectives.

Ok, raise your hand if you understood any of this… Anyway, moving focus over to what matters most, the music. Which can be described as a mixture of industrial and traditional metal/rock, and quite unusual. The pace is varied, one second its balls to the walls rock & roll, then suddenly more slow and doom like. The music is in other word different, and so are the vocals. Not sure how to describe it, screaming industrial punk vocals perhaps? And not very pleasant. There are some female vocals also, all in all ok, but nothing more. To be honest, I can not think of anyone I would recommend this to. The fact that it all has poor sound and production does not help, and neither does the use of drumming machine on 9 of the songs. Lets move on folks, nothing more to see (hear…) here.