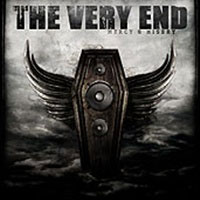 German thrash with modern and hardcore overtones, The Very End unleash a second album !Mercy & Misery! that has much in common with Grip Inc. and Machine Head to my ears. The rhythm section keeps the groove factor going, Bjorn Goosses alternates between acidic screams and lower, discernable mid-range singing, especially during the choruses. I’ll admit there’s some material that will get the toes tapping and the mosh pit excited with furious abandon, such as “Dead Is The New Alive” and “A Hole In The Sun” – the latter containing a slight modern rock vibe in the chorus but more of a Crowbar riff assault through its main sections.

Conversely, their take on Led Zeppelin’s “Immigrant Song” belongs back in the rehearsal room drawing board – with Bjorn incapable of hitting any of the Robert Plant highs and relying more on a James Hetfield-like growl that sounds annoying rather then refreshing. You’ll find little to fault with the heaviness and sonic representation Waldemar Sorychta provides The Very End – I just think it’s not necessarily as exciting as many of their musical peers profess on their website endorsements. And taking on the 80’s Flashdance classic “Maniac” as a bonus and giving it a metal-core makeover just makes no sense on any level…

Advice for the five piece? Use your double guitar lineup to better effect – they have the playing skills and chemistry to really make the riffs and songs standard apart. “Rat Nation” even recalls the greatness of At The Gates on their "Slaughter Of The Soul" swansong with its upbeat drums against slightly off-time guitar parts. Otherwise "Mercy & Misery" is serviceable thrash at best.