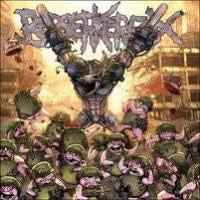 “History. Altar. Ashes” is the debut album from Australia’s BeserkerfoX. The music is a mix of classic metal and thrash with death metal vocals. Although BeserkerfoX  are a young band, they obviously know what they are doing. The songs are dynamic and melodic with plenty of memorable parts. The guitar-work is excellent too. The band produces all of their own stuff, and while there is a slight DIY feel to the sound of this release, it is mostly very clear and professional-sounding. Having said that, I would have preferred a bit more power, warmth and immediacy.

The band’s mascot is – you’ve guessed it – the BeserkerfoX. This is a strange chainsaw-wielding zombie fox who likes chasing pigs dressed in military uniforms around the place. And there we have part of the problem. Old Mister BeserkerfoX is not the most convincing premise to build an image on and the band’s music does little to add character or interest.  However good the songs are (and they are better than the 4/6 I am giving the album), the band’s identity (musical and otherwise) is not strong enough to take them to the next level. They could be marketed as Dark Tranquility Lite.

Ultimately, BeserkerfoX are a band with very high potential but their music needs more of an edge and they need to think about their image and how committed they are to that mascot. As it is, they run the risk of remaining anonymous, and that would be a great shame.