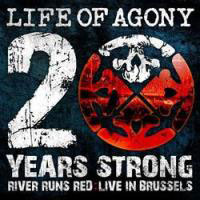 When “River Runs Red” was first released in 1993, there were those who didn’t know what to make of it. Life of Agony looked like a hardcore band. They hung out and gigged with all the NY hardcore crew. But they were signed to a metal label. And the music was metal for the most part, albeit it of a type we hadn’t heard before. Then there were the lyrics, covering personal problems, divorce, depression and fantasies of suicide. No drinking stories, tales of murder or political rants. But perhaps the biggest single factor that made Life of Agony stand out was Keith Caputo’s vocals.

Since the release of “River Runs Red”, genres have mixed and borrowed from one another to a great extent and it is not unusual to hear clean vocals with this type of music, but back then, Caputo’s voice and approach came as a revelation to some, me included. Apart from Glen Danzig and Fugazi’s Ian McKay, hardly anyone sang like that. This was the year of “Under a Funeral Moon” and “Hammer Smashed Face”. Caputo’s vocals made Life of Agony feel fresh and interesting and helped them to pack their songs with the emotional intensity and catchy hooks that their reputation is based on.

So here we are, 17 years later. How have the songs held up? I am glad to say, very well. The band is tighter than ever, with monolithic guitars driven by the pounding sticks of Sal Abruscato. The choruses are, if anything, even more anthemic as the crowd help Keith and the guys raise the roof. The performances are rock solid throughout. LOA have been playing these songs for 17 years and make playing the set look like the simplest thing in the world. Keith Caputo is in fine form, his spastic stage antics recalling Ozzy circa 1970.

The CD and DVD have the same content: the complete “River Runs Red”, including all of the sound bites of domestic rows and phone messages where the protagonist of the concept album gets dumped, fired and flunks school. On top of that there is “Love to Let You Down”, “Weeds” and “Lost at 22”. The production is good too. The sound is chunky and the camera work and editing, although quite basic, are done well. LOA don’t have the most impressive stage set you’ve ever seen but this works in their favour, as the focus is kept on the music.

As a fan of the band who hadn’t listened to them much in recent years, watching “20 Years Strong” and rediscovering all of those memorable riffs and refrains has been a pleasure from start to finish. If you were ever a fan of the band, then this is the perfect way to renew your acquaintance. If you never got into them or haven’t heard them before, now is the perfect time. Enjoy!

PICTURES OF PAIN – The Reckoning