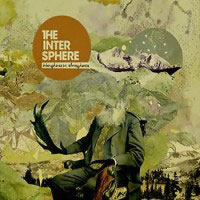 As a metalhead it is hard to stay objective when presented with such a sugar-coated pop-infused album as this. After listening to it countless times, I just have to settle with the fact that I’ve got a love/hate relationship with The Intersphere. Half of the songs send chills down my spine in disgust, mostly because of the cotton-candy-cute vocals. The other half gives me goose-bumps caused by the awesome melodies. The fact of the matter is that The Intersphere is a band which got a unique talent for making catchy melodies as they mix pop with progressive rock and metal elements.

This album does remind me a lot about Frost’s incredible “Experiments in Mass Appeal” of 2008. The singing and melodic structure is very similar. The Intersphere isn’t nearly as progressive though, and also does not have the electro-pop feel that Frost colors their albums with. The opening track on “Interspheres<>Atmospheres” is called “Prodigy Composers”. It is the heaviest track on the album, and also the one closest to Frost. On other tracks, such as “I Have A Place For You On Google Earth”, the slow extensional progression and prominent bass reminds me of “Tool” on a compositional level. This particular track does show a more mature side of The Intersphere.

All over, this album is a lot lighter though, with very accessible material. The riffing and melody on “Early Bird” makes me think of Queens of the Stone Age. The melodic composition is as mentioned one of the biggest strengths of The Intersphere, though repeated listening definitely is recommended as their music proves to hold more under the surface. This album definitely grows on you.

Favorite tracks are “Prodigy Composers” and “Early Bird”, but if you enjoy music that demands a bit more from its listeners, “In Satellites” or “I Have A Place For You On Google Earth” could very well be your favorite track. The album definitely has several sides of diversity and playful experimenting which makes it interesting. Still, I can’t completely rid myself of my metalhead preconceptions. There are some songs that just are too sweet for my taste. At its best, however, The Intersphere is awesome.

UFO – The Best of a Decade