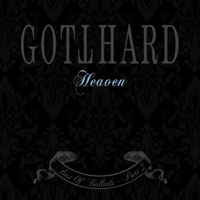 Tragedy struck this Swiss hard rock veteran act when 47 year old singer Steve Lee died on October 5, 2010 due to a tractor trailer skidding into his parked motorcycle in Nevada. Gotthard may not be the most famous band peddling conventional bluesy hard rock in the history of the genre – but I would say based on their front to back discography they prove that they can keep up with the Whitesnake and Bon Jovi brigade in terms of killer songwriting and performances. They obtain double and triple platinum status in their home country, playing to arena audiences while touring. Obtaining a bigger deal for Europe with Nuclear Blast a few years ago, they were planting bigger roots in international markets… and now this major setback.

So we get a second full length retrospective spanning their softer, slower side over the course of the last few studio albums- and a couple of bonuses to celebrate the holidays with. A mixture of conventional electric power ballads along with some acoustic renditions, Gotthard pull out all the stops in terms of dynamic ability with their heartfelt harmonies, musical chemistry and tugging at all the emotions you would want out of this material. My favorites out of the 16 include the Zeppelin acoustic/electric duality within “Unconditional Faith”, the Y&T meets Vandenburg-like “Tears To Cry” and the stripped down “Falling”.

It’s unclear if the remaining members of Gotthard will find a vocalist on par with Steve Lee and continue forward with new albums. In the meantime, do yourself a huge favor and discover all of their studio albums to keep hard rock alive and kicking.