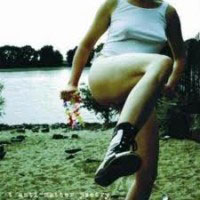 It is certainly an original brew that Mr. T is presenting in this one-man-band, anti-art-voyage. The promotion following this album is a statement claiming that this music is a statement against the clichés of art, poetry and music. The album is supposedly an anti-matter product in a world spewing out conformist predictabilities to its unknowing audience. It is all a big load pretentious babble of course. Pseudo-academic language is utilized to compose a pseudo-manifesto. From a reviewer standpoint, it was off-putting rather than raising my attention. The music in itself is original, but as far as I can perceive, it doesn’t appear to be anti-anything.

“Anti- Matter Poetry” is a well played, well composed progressive rock album with a lot of ambient elements in it. The opening 10 minute track builds up in an ambient doomy 6 minutes before the vocals breaks in with a melancholic melody. It sets the standard for the album, and reminds me quite a bit about The Mars Volta. In many of the songs I kept thinking of David Bowie, as the lead singer has a somewhat similar style and tone to his voice. Some elements from technical progressive instrumentality are presented in “Phantom Paint Scars”, which incidentally is my favorite track on the album. Other than this, there are saxophones, some minor electro-pop elements and slow moving progressions ensuring that this never is a boring journey. Still, it is a bit slow going and unexciting on the compositional level.

If you appreciate challenging albums, melodies that don’t jump into your lap, and dig The Mars Volta or David Bowie, this might be your thing. Imagine a quit, slow-moving mix of these elements thrown together in a progressive rock melting pot. The feel and variation on the album makes it worthwhile for me, but I miss more tracks like the previously mentioned “Phantom Pain Scars”. The rest of the tracks are a bit to ambient and slow-progressing for me to really take off on this album. It is well executed though, and definitely has its moments.