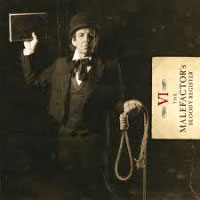 As with “The Dystopia Journals”, I hear a lot of Arcturus in Vulture Industries on this album. There is no lack of identity on “VI TMBR” as Vulture Industries presents what appears to be a more mature album than its predecessor. I would say that this new album is better on almost all accounts. Still, there are some differences that might be alienating to fans of their debut.  Where “The Dystopia Journals” was closer to progressive metal, I would say that the elements from 70’s progressive rock is much more prominent on this sophomore album. The use of saxophone, melotron, and hammond-like synth samples partly contributes to this assessment, but also on the compositional level the influences from the 70’s progressive rock shines through.

How this affects the new album is in that it demands more from its audience. For yours truly this is a good thing, as I found their debut to not be as long lasting as I initially expected. If you give this new one some time, I assure you that the album will creep up under your skin. I especially would like to point out the tracks “Hangman’s Hatch” and “The Bolted Door”. These are without a doubt Vulture Industries’ finest moments so far. These tracks really release the potential showed on “The Dystopia Journals” with their magnificent blending of progressive rock, progressive metal and death metal elements.

Another factor which makes “VI TMBR” more enjoyable than its predecessor is the blooming of lead singer Bjørnar Erevik Nilsen. His improvement on this album really pulls the band sound together. I was in no way disappointed with his effort on the debut. I just didn’t realize how much more he could be. Black and death screams is no match for this guy. But it is his maniacal clean vocal that underlines Vulture Industries’ identity in a perfect way. His clean vocals are both reminiscent of “Emperor” as well as the delightfully clean sung choruses of Anaal Nathrakh.  If you like your music challenging, dig bands as the two before mentioned, Arcturus or even later Enslaved, you should check out this album. 1 point was reduced on their score though, on the account that the latter half of the album isn’t as strong as the kick ass first part.