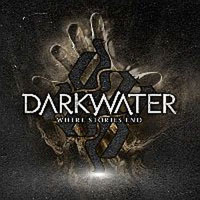 The second album from this Swedish five-piece, "Where Stories End" balances the skill of Symphony X or Tad Morose with the moodiness and diverse heavy atmosphere of Evergrey. Guitarist Henrik Bath possesses one of those cleaner progressive voices, easily engaging the followers with supreme melodies on “Into The Cold” and even the slow building epic material like “Fields Of Sorrow”. Keyboardist Magnus Holmberg isn’t merely the quick fingered solo maven, he also plays an important riff role in songs like “Breathe” or “Queen Of The Night”.

Harmony and 7Days guitarist Markus Sigfridsson also plays in Darkwater, and I believe this group is a perfect outlet to explore his heavier meets progressive technique. Those of you who miss the older sound Evergrey perfected on "Solitude Dominance Tragedy" will certain be doing hair windmills and air guitar maneuvers to songs like “In The Blink Of An Eye” and closer “Walls Of Deception” (the latter featuring robust multi-layered harmonies from Henrik).

Everything clicks in terms of the arrangements, riffs, performances and instrumentation detail on "Where Stories End". This is one of those records that may not initially burst out with force or adrenaline, but give it repeated exposure and the layers start to sink deep and cause mind/body movement. The standout track “Why I Bleed” travels through tranquil, open clean verse moments and chug-a-thon chorus parts that appeal to most metalheads around the world- the stop/ starts sending chills to the spine and allowing the rhythm section a few moments to shine with their skill sets.

SAL – Conversations with My Therapist