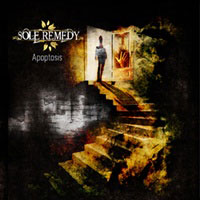 Alternative progressive melancholic metal appears to be the definition springing to mind when taking in this second album from Finnish quintet Sole Remedy. Forming as friends in 1998 and taking their time to move from more of a progressive rock act to fusion, bluesy rock and eventually heavier dimensions, their debut album The Wounded Ones came out in 2008 independently and with limited quantities. A new bass player and a permanent keyboardist later, the follow up Apoptosis floods my speakers with a vigor and vitality one would expect from veteran musicians.

Acts like Katatonia, Tool, Pain Of Salvation, Porcupine Tree and Opeth certainly can be debated for the purists as influences for Sole Remedy. Vocalist/ guitarist Jukka Salovaara conveys his lyrical tales with that lower, soothing alternative voice – reaching into the deepest recesses of his feeling bank on tracks like “The Burden” and “Wolf In Me”. The guitar play often has that ringing alternative vibe to it, a cross between the post 90’s British feel and the powerful vision of say Mastodon on the epic 7 minute “Solace” where guitarist Mikko Laine can lay down some subtle progressive jazz lines against the walls of riffs and rhythmic moves.  Even the marching meets vacuum sucking electric sweep motions through “Present Remorse” put me in a calm, appreciative state of mind.

Some of you may wonder with all the accolades thrown about, why the rating seems to be more in the “very good/ not quite excellent” framework? Purely a selfish reason: I want Sole Remedy to continually challenge themselves and their listeners to produce that monumental album where people will stop the comparisons and appreciate these musicians on their own accord. I believe they can ascend to a Ghost Brigade critical mass appeal with the follow up – as they have an understanding of light and dark dynamics to make people think, move and return to these songs incessantly.

Another reason why most American acts are behind the curve, as they struggle to think from their head and heart when creating music, the see saw between technique and feel. Apoptosis captivates.