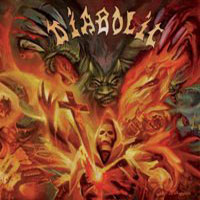 After more than half a decade in the wilderness with only a couple of EP’s to show for it, Diabolic return with their fifth full-length album “Excisions of Exorcisms”, a blistering slab of straight-up, old-school Floridian death metal.

Diabolic may not be the best songwriters in the world, nor are they the most technically proficient band out there, but what they lack in these areas, they make up for in speed and sincerity. Aantar Coates creates a storm behind the kit, setting up a barrage of double bass and snare beats that drive the songs along at a hectic pace. The guitars are fast and heavy, peeling off into high speed fret-board pyrotechnics that add to the sense of urgency. And, while the vocals are pretty standard death metal gravel, they work well with the music.

In terms of production, Juan Gonzalez (associated with Morbid Angel and Nile amongst others) has done a great job of capturing the power and energy unleashed, giving the album a rich, heavy, organic sound.

Unfortunately, after a dozen listens, I found that I hadn’t bonded with this album as much as I wanted to. I love the sense you get that the band are going for it – really pushing the envelope as far as their musicianship is concerned and seeking to create as intense a listening experience as possible. It just seems that the songs are ultimately a little too one-dimensional for this to be the great album I wanted it to be.  So, although I loved the honesty and enthusiasm of this record, this means the best mark I can give it is a high four out of six.

Standouts include the scorching “Venomous Habitations”, “Bloodwashed” and the slow but effective “False Belief”.