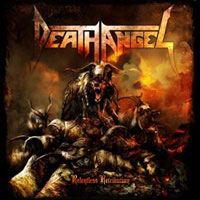 You can debate your favorite bands and the albums that you wish they would re-create for years on end. When it comes to Death Angel, a lot of people struggle to move beyond their debut thrash album “The Ultraviolence” with its epic songs and raw energy. Especially when you see the chances they took with funk and U2 guitar jangling on the follow up “Frolic Through The Park”.  For others who respond to musicians willing to grow and experiment, “Act III” struck a positive chord with its melody and prominent electric to acoustic dynamics.

Taking an extended break to pursue other musical interests with The Organization and Swarm, following the Thrash of The Titans reunion Death Angel have been a fixture again on stage and record. “Relentless Retribution” is their third album since reuniting and continues the band’s exploration between playing what the fans want (thrash) along with keeping their heads in the modern game (production, energy, grooves).

Surprises for me start with the performance from vocalist Mark Osegueda. I am well aware of his versatile pipes through the years, but it appears with songs like “Truce”, “River Of Rapture” and “I Chose The Sky” he’s taken a shot of adrenaline, poured it through the lungs and out comes this pure hatred we haven’t heard in quite some time. New drummer Will Carroll gives this material another burst of mania, using his previous traditional and power roots to display some nifty transitions during “Into The Arms Of Righteous Anger” and more of a doom plod during the “Harvester of Sorrow”-like “Absence Of Light”.

The guest acoustic action from Rodrigo Y Gabriela on the ending of “Claws In So Deep” is the icing on the cake of “Relentless Retribution” – this feature track containing everything I expect from Death Angel: immediate thrash with a catchy chorus and some cool tempo juxtaposition during the bridge and instrumental sections.  Producer Jason Suecof keeps the Death Angel sound in tact – no worries over the guitar duo Rob Cavestany and Ted Aguilar sacrificing anything in terms of their savage attack.

We’ve been waiting years for Death Angel to deliver a complete album close to capturing their talent displayed on “Act III” – and “Relentless Retribution” needs to be investigated by all past and present followers of this great California thrash group.