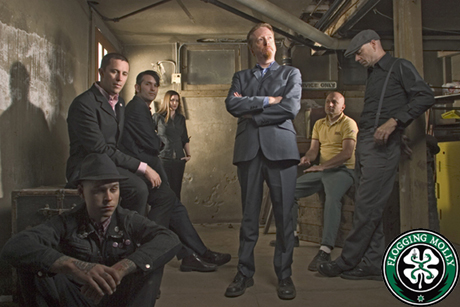 First of all, congratulations with the "new" album, and a great show in Oslo in November! Did you enjoy the show and your stay here? How has the reactions been so far, on the album and the tour?

We loved our stay in Norway. Freddy, our crew member who sells our merchandise, is from there. We had a great day off at his family's house. I will say it is very expensive there.

It was our first time playing a club show in Norway. We played a festival called Hove I believe. Anyways, it was a sold out show, and people were amped up for the show. It was a great venue and a great audience. I'm not sure what it is we do that makes Norwegians go nuts but it works. We will be back. It was one of the best shows on all of The Eastpak Antidote Tour. It's really great when you play a place you've never played before and sell it out.

How has things been since your last visit here; any noteworthy events?

We just finished up our annual Green 17 tour here in the USA. The last show is on St. Patrick's Day. This year it ended up in Chicago. All shows sold out but 1. So it was a great success for us. Also our DVD "Whiskey On A Sunday" went platinum.

You wrote and recorded Float in Ireland; do you think that played a part in the albums atmosphere? Can't see that writing Irish-inspired music in Hollywood is quite the same…?

When you close the doors to the garage it could be anywhere. We've written all of our records in a garage. The biggest difference of doing it in Ireland was we were secluded in the Irish countryside with nothing but farms all around. We rented a house to live in, wrote, and rehearsed in the garage. In Los Angeles we wrote and rehearsed in Dave's garage and went home at the end of the day. In Ireland we would hang out and discuss the day, listen to ideas then go the the pub. There was no TV, no radio, cell phones didn't work. So we focused on the music more. Dave seemed to write more about Ireland when he didn't live there.

I just read a review of "Float", in which the writer criticises the album to be too "safe" and lacks challenges and surprises.

I can't say I agree with that statement at all, and there's definitely some progress from Swagger to Float. By that I mean it sounds like you've taken in a lot of different inspirations over the years, at least on your last two albums?

We like to try different things and push ourselves into new territories. We've been a band for over 10 years so I think it's impossible to not evolve. It's kind of like you as a person. I'm sure you are not the same person you were 10 years ago, for better or worse. And all this touring has made us better musicians. We don't look back at or work and try to be different, we get into a room and what happens happens.

You have been touring for quite a while after the album was released, are you planning to continue touring for a while? And what are your plans in general for the future?

We will always tour, Flogging Molly is a live band. I don't see us stopping any time soon. We won't tour as much as last year. We are heading to Japan and Hawaii in April and Europe over the summer as well as a few weeks on the "Warped Tour"

Are you maybe planning a European tour again this year? Maybe another visit to Norway or any of the other Scandinavian countries?

All the dates are not filled yet. Our web site floggingmolly.com will have all of the info as we get it.

Have you started writing new material? When can we expect a new release of any kind? I hope we can't expect another 4 years, like between "Within A Mile.." and Float?

We as a band have not started writing. We all write on our own. Then when it is time we bring it all together. I, as well, hope we don't take 4 years to make another record. I don't think that will happen. Maybe later next year.

I was supposed to see you at the Oxegen Festival in Ireland this summer, and you were scheduled at the same time as The Pogues! What was the deal with that? Seeing that you and The Pogues share a lot of fans? (Unfortunately I had to choose The Pogues, since I'd seen you in Gothenburg, Sweden just a few weeks earlier. Sorry about that, haha!)

I would have done the same, because we seem to tour more than them. Believe me every one of us was pissed off. We still don't know who or why they did that. That was probably one of the dumbest things I've seen in a while. Oh well. It would be great to do a tour with The Pogues and The Dropkick Murphy's one day.

You should actually do a tour with them! That would be Epic!

The night after you played the Hove Festival in Norway in June, you crashed at a hotel in my hometown Drammen; I read a small note about it in the local newspaper. We were sitting at a bar downtown that very night, warming up for your show in Sweden the next day. Quite a coincidence, isn't it? Did you enjoy the city?

I honestly don't remember it. We did so many shows last year it's hard to remember one hotel from another. I'm sure if I saw it I would remember it.

"Celtic Punk" has definitely claimed a lot of fans recent years, with you, Dropkick Murphys, The Tossers, Real McKenzies and even The Pogues with their reunion shows. Why do you think this is?

That's a better question for you maybe. I've seen all the bands you mentioned, maybe it's because they are all great bands.

Flogging Molly is probably the closest and most noteworthy Post-Pogues band, how did The Pogues serve as an inspiration to you?

To be mentioned like that is an honor. To be compared to them is a compliment. I listened to them, still do. We have many inspirations, they are one of many.

The cover for "Float" is probably the most cosy and pleasant cover ever; it looks a lot like my regular pub in Dublin, The Celt. (It's in Talbot Street, you should check it out sometime). What's the story behind the cover art and the albums title?

The cover is a pub at the recording studio. The studio is very secluded surrounded by farms. Nothing for miles and miles, so they provide you with food and a pub. It is really nice in there. I'm glad you got it (cosy and pleasant). It's an old building over 1000 years. We would end up there every day after recording, playing music, darts and having pints of Guinness and whiskey. We decided one day to let the animals in during the photo shoot. There were 5 or more dogs, I don't know how many cats, and horses as well. We couldn't fit them all in the pub. We should have tried. The title has to do with us keeping our heads above the water after being a band for 12 years, after all the trials and tribulations, good times, bad times, losses, and victories. We are still together doing what we do, with the same line up, and with the same passion for this music.

You have been a band for twelve years now, am I correct? That must be a great feeling. Are you still standing strong, or have you had many difficulties along the way?

I think I just answered that. But I will say it's something I am proud of. 12 years is a long time to keep a band together with the same line up. It's a testament to our love for one another and our passion to make music together. I hope to go another 12 or more.

Well, that about does her. Rounds her all up. Thanks again for your time. Any last words before we finish?