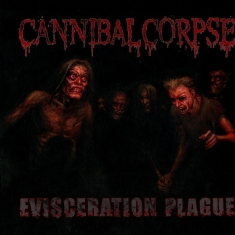 Alex Webster comments: "For 'Evisceration Plague' we enlisted legendary gore/horror artist Vincent Locke, who has done artwork for all of our releases. He did two pieces for us this time, a dark and foreboding cover piece, and a violent and gory piece for the interior of the CD packaging. Vince has shown once again that he is a master of capturing a macabre and eerie vibe with his artwork."

'Evisceration Plague' marks the follow up to the band's extremely successful 2006 release 'Kill', which has become the fastest selling CANNIBAL album in the band’s storied career as well as highest selling album since 1996’s 'Vile'.

Be sure to keep an eye on the newly redesigned CANNIBAL CORPSE MySpace page for an MP3 off of 'Evisceration Plague' and upcoming tour dates.

Comments the band on the front art: "The cover more or less depicts the peak of our civilisation. These are the works of man, who has performed so many technological and scientific miracles in such a small amount of time. But confusion lurks. The balance is obviously shifting for the worse. It takes courage to step back and pursue happiness and prosperity through means less hazardous to our environment. Yet the man in his flying contraption does just that. He is vulnerable… and flying at high altitudes was never without peril."

'Altitude' was recorded at Arno Krabman's Graveland Studio while mixing and mastering was done by Jochem Jacobs (Textures) at SplitSecondSound.

An audio preview of 'Altitude' can be found on AUTUMN's MySpace site. Click here to check it out: http://www.myspace.com

The limited first edition will be released as a Digipak including an exclusive bonus track!

PSYOPUS has always been on the cutting edge of tech metal – pushing the genre to an extreme that no other band has yet been able to reach. Led by main man Chris Arp (who has been a touring guitarist for Hank III and Ass Jack), their new album, 'Odd Senses', promises to provide just that; especially in the category of "how in the hell did he play that?"

Cover art for 'Odd Senses', PSYOPUS' third studio album, can be seen here along with the track listing. Here's what main man and gonzo guitarist Chris 'Arpmandude' has to say about the new album: "I am super psyched about the new album. I think the sound of the group has successfully been reinvented. The album lays out a colorful pallet of new concepts and attitudes which, from start to end, is quite the fucking trip. I am anxious to let our fans have the opportunity to dive right in!"

The album will list 10 tracks all lending themselves to the PSYOPUS tech, mathy and experimental formula.

PSYOPUS have uploaded a brand new song taken off 'Odd Senses' on their MySpace page. Click here to check out 'The Burning Halo': http://www.myspace.com