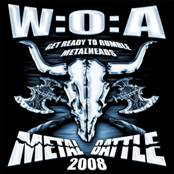 Chicago, IL, April 2008.  Washburn Guitars and Eden Electronics have recently signed a strategic partnership with Metal Battle that will take place worldwide.  The Metal Battle started in 2005 and is a talent contest for unsigned heavy metal and rock bands.  This year a total of 17 countries will participate and includes Germany, Belgium, France, Switzerland, Finland, Brazil, ex-Yugoslavia, Poland, Netherlands, Luxembourg, Norway, Austria, Italy, Israel, Greece, Lithuania and China.  There will be at least one live heat in each country with 57 live heats in 2008 altogether. The competition will culminate at the international finale which will take place at the Wacken Open Air Festival from July 31st to August 2nd, 2008.  As in previous years, the 2008 Metal Battle promises to be one of the premier music competitions specifically geared towards heavy metal bands around the globe. “Metal Battle is an amazing platform for upcoming metal bands aiming at international attention and coverage,” says Greg Heritier Director of European Sales from U.S. Music Corp.

“We are extremely excited about our partnership with Metal Battle,” says Jody Dankberg, Director of Marketing and Artist Relations at U.S. Music Corp., “it further connects Washburn Guitars and Eden Electronics to our company roots and the pulse of metal market.”  Washburn Guitars will be the official guitar partner for the competition, while Eden Electronics will be the official bass amplifier partner.  Both companies will award gear to the Metal Battle international finalists which will perform live at the Wacken Open Air Festival in Wacken, Germany.  In addition, the winning band will also receive artist endorsements with both companies.  “With Washburn Guitars and Eden Electronics we have found two great new and dynamic partners that go the extra way to support the Metal Battle and the world wide metal community,” says Enno Heymann from Metal Battle.  Let the Battle begin…