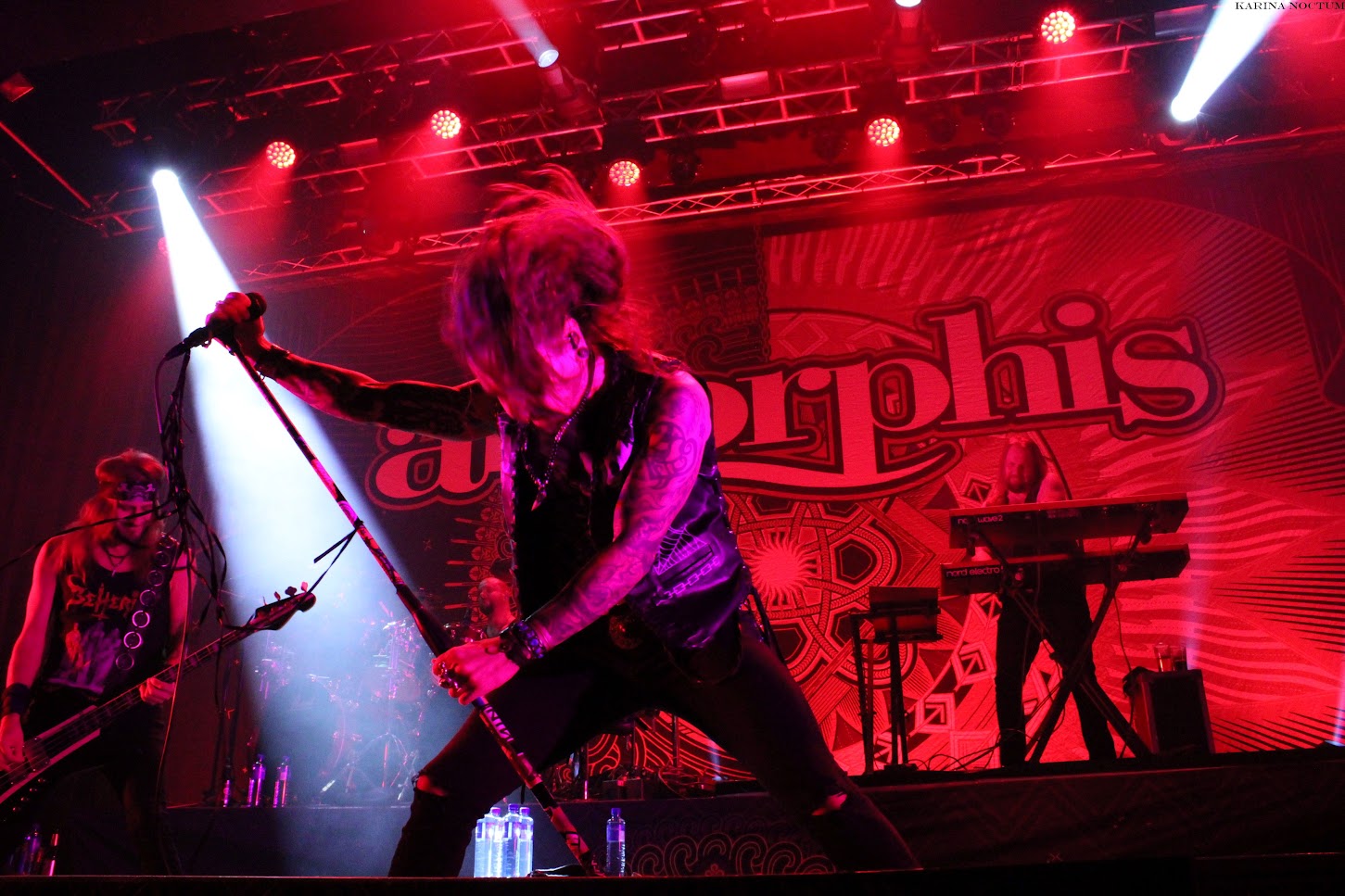 After a good number of weeks away from the live concerts, the Amorphis/Eluveitie show in Oslo with support from Dark Tranquility and Nailed To Obscurity, was a good lineup for my personal ‘comeback’. It was midweek though, so the run from work, dinner and other detals didn’t allow to catch the first act. I notice a trend for some of the bigger concerts to be almost like a mini festival, some even having 6 shows per night. Hope it won’t catch, even if I understand the financial motivations behind it. But it’s close to impossible to make it in decent time to show support to the first bands on stage. So I arrived a bit before Drak Tranquility started and I feel like the security company has dispatched some of their most arrogant personnel to watch over the evening. Some contracts have changed for Sentrum Scene/Rockefeller and sadly, not for the best impression.

Good thing Dark Tranquility offer some of the most charismatic interpretations of their “Gothenburg Death Metal” melodies and vocalist Mikael Stanne is always a joy to experience live. He always ‘jams’ along when he’s not singing and is full of contagious good mood. It brought a lot of joy to the crowd when he announced they’re playing some of the songs that have never been performed live before and it kinda felt like this increased the intensity of the most pits. It even led to some courageous acts of crowd-surfing, which at Norwegian concerts is kinda similar to anarchy. While the ‘surfers’ were nicely caught by the guards in the pit, holding their arm behind the back while leading them out of the pit was a sad sight. Together with the lever of aggression shown in gestures when a girl was lifted on someone’s shoulder AFTER the concert ended and the band said their goodbyes. Or having a jovial – but drunk – fellow walked out of the venue (I hope they had the decency to let him get his jacket) while some well hidden but more affected older dudes had the time of their life. So, I guess one should just stop having fun in the first rows and it’s all good. Anyway, rant over. I’m saddened that the imbecility of concert security rules is taken towards extremes rather than towards the common sense used in most other countries that happen to well, organize concerts too.

So, Dark Tranquility, lovely to watch live. Stage looks like an ants nest for some minutes when the hard working crew has to switch from a stage suitable for 5 people to one for…9 I think. Let’s say many. I have watched Eluveitie live a few times by now and I don’t think I’ve ever seen them with such an extensive line up. But well worth the effort and all the rehearsals and planning, since the show was really mesmerizing from the first beat. And all the folk instruments all of a sudden stood out in a better manner than at other shows, they had more ‘power’ and supported eachother in front of the loud instruments usual for a metal concert. There were so many flutes on the stage, the band even built a flute stand for them. I loved how this whole mix of folkish sounds and metal music was delivered and most of all how it was masterfully led by the vocals of Chrigel Glanzmann and Fabienne Erni, who balanced eachother nicely throughout the evening. And it was cool having Fabienne go between having a main or even the lead role for some of the songs and moved all over the stage, and then went back and played her harp while still singing and accompanying Chrigel. She even did a lovely solo piece and showed us her real vocal strength and if my memory serves me right, this was right after the playful drum solo which gave everyone a well needed time out. Everyone except the drummer, but he never seemed to want to stop anyway. All in all I am glad I witnessed this new ‘version’ of their live show. Would surely attend again if the chance shows up.

Some more ‘ants’ logistics (I actually like to watch stage changes as much as I like the shows sometimes, especially when a big number of well organized crew members quickly transform the place to fit the next band). I have seen Amorphis so many times during the travels to Finland in my previous years so I was glad to finally understand what Tomi would say to the crowd. While I used to play their albums on repeat, nothing since “Far From The Sun” has had this effect on me. I listened to all the stuff when it got released and then I just felt like going back to the ‘familiar’ stuff. So I was kinda hoping there’d be some of those at the beginning of the set, but with a recently released album ‘Halo’, it only made sense the band would play intensively for it. And it was…ok. They’re all skilled musicians with experience so they’re very good at playing tight and with a good energy, and it actually felt like all the new songs give everyone a chance to have some more intricate solos. Both keyboards and guitars at least. Which was fun to watch. And even if the ‘new’ (like, 20 years old, but new for me) stuff wasn’t too familiar to me, I was happy to notice the crowd reacting and singing along. I was thrilled to be treated to ‘Black Winter Day’ and ‘My Kantele’ (somehow one of my favorite Amorphis songs) towards the end of the set and feeling bad that I started yawning so intensively. I surely failed at showing any enthusiasm, but I swear I loved those moments.

It was nice to watch live shows again. I missed the energy of happy fans and happy artists playing heir music for them. It was heart warming to hear Eluveitie saying how good it is to go on tour again after the years of lock downs. One can only hope it will last.

HOUSE OF LORDS – Saints and Sinners