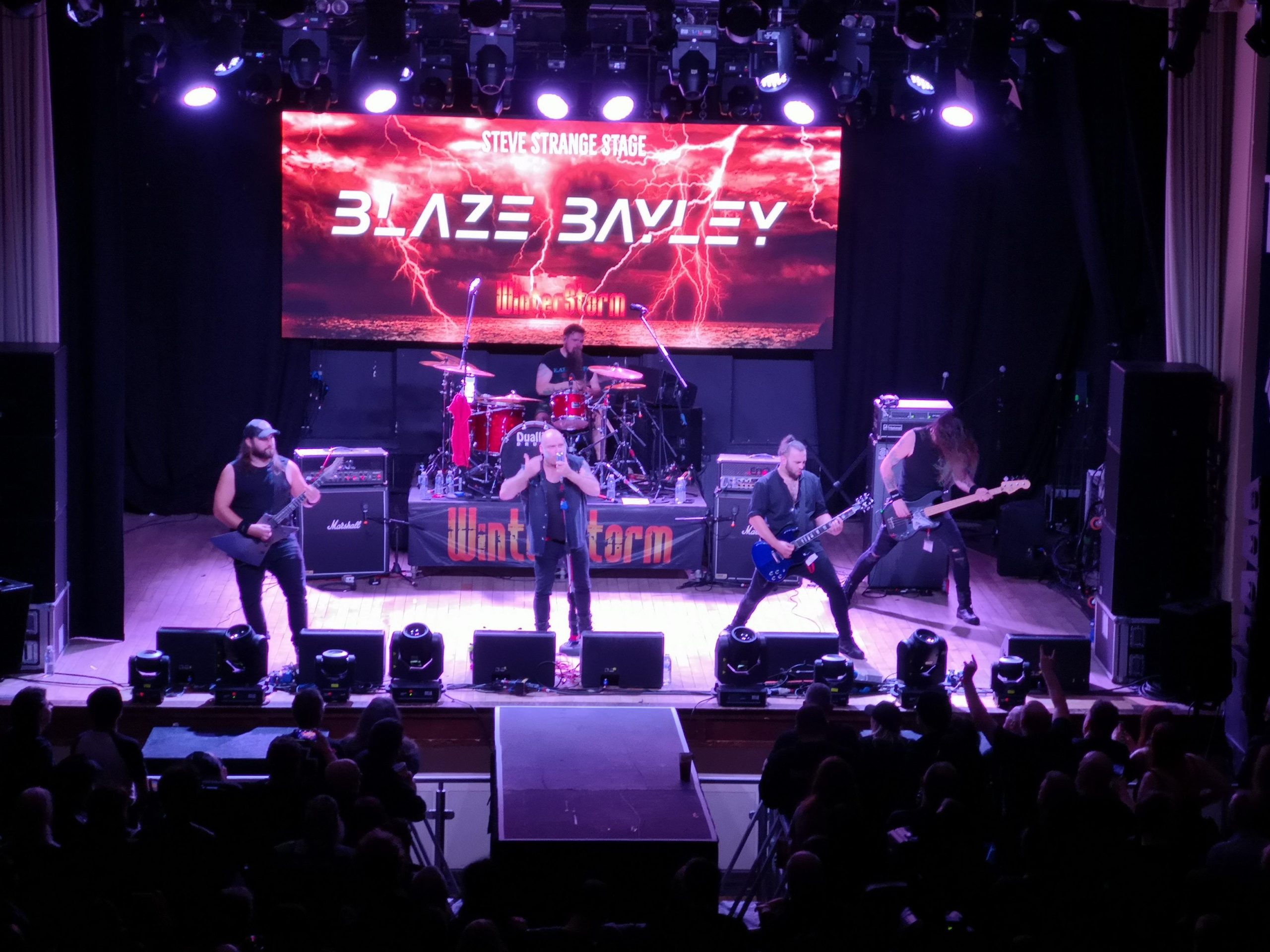 The excellent WinterStorm festival in Troon, Scotland, is undoubtedly one of the year’s highlights for this writer and a very cozy tradition of sorts. The line-up is simply amazing each year and if one is a sucker for all things hard rock and heavy metal, this is the place to be in late November. The old Concert Hall is lovely and boasts great acoustics, the staff is incredibly helpful and friendly, and the fans who congregate at this hallowed location are welcoming and all about having a great time. This is also the place where members of bands mingle with the audience and hang out, which adds a huge charm to the warm and intimate vibe of the whole event.

Arriving slightly late on Friday, we quickly grabbed a bite to eat and a couple of beers and were ready to immerse ourselves fully in the music by the time the wildly talented Sari Schorr from New York walked on stage and delivered a powerful, oftentimes hauntingly beautiful performance where her take on heartfelt, atomic blues rock a la early Led Zeppelin left us spellbound. Her vocal range is stunning, and the band is right in the pocket, packing every note with emotional heft. Evocative is one way of putting it.

Next up was Kingdom of Madness, which was the act that I was most keen on seeing this year, and the six-piece did not disappoint in the slightest. The dynamics, energy, and atmosphere of the affair were magnificent, and the old Magnum classics really came to life and sounded phenomenal. Watching Mark Stanway and Micky Barker weave their magic on stage and beholding the interplay between the various members of the outfit was a real treat. Singer Mark Pascall has charisma and talent in spades, and songs such as ‘Changes’, ‘Only in America’, ‘Just Like an Arrow’, ‘On a storyteller’s Night’, and ‘Sacred Hour’ have rarely sounded better than they did here. Memorable is the keyword.

Former Iron Maiden vocalist Blaze Bayley is simply incapable of delivering a lackluster or below-par performance. He is consistently right on the money, and the amount of passion he pours into his shows is awe-inspiring. At WinterStorm he confidently walked on stage, grabbed us by the collar, and made us pay attention. He totally owned the place, and his fifty-minute set was both inspired and inspiring. Apart from the fierce ‘Warrior’ from his latest LP titled War Within Me, the setlist was a celebration of his work with Maiden and so we got ‘Lord of the Flies’, ‘Sign of the Cross’, ‘Judgement Day’, ‘Virus’, ‘The Clansman’ (where the entire venue erupted in pure ecstasy), the melancholy gem that is ‘Come Estais Amigos’ (which had never been performed live before), the anthemic ‘Man on the Edge’, and finally the concise and climactic ‘Futureal’. It warms my heart that The X Factor and Virtual Xl are enjoying a proper renaissance these days with the crowd singing along and knowing every word and syllable. Blaze kicked ass. Phenomenal sums it up quite nicely.

Due to other activities at the festival and catching up with old friends, we only heard one song by Scarlet Rebels, so I cannot comment on how they fared, but headliners Eclipse were on fire and translated the excitement and potency of their studio outputs into their live show with style and ease. I particularly enjoyed the tunes from the riveting record named Wired with ‘Roses on Your Grave’ being the highlight to these ears. A fine ending to an amazing day.

The first band we caught on stage on the Saturday was Ashen Reach, which turned in a confident, vigorous performance, and their explosive yet incredibly diverse brand of modern metal was quite refreshing and invigorating. A talented act for sure and one to keep an eye on as their musical future is looking very bright indeed. They also have an impressive album out that people ought to give a listen.

Blues rocker Rebecca Downes and her talented cohorts blew us all away by means of blistering playing and an abundance of groove, soul, and unfiltered zeal. The cover rendition of Led Zeppelin’s immortal ‘Rock and Roll’ was spirited and hotter than a steel furnace. What an exceptionally great voice she possesses.

Veteran bass player Marco Mendoza whose resume reads like a who’s who of hard rock has carved out a very cool solo career these past few years and released two noteworthy records containing some killer tracks. The three-piece band tore through Marcos’s uplifting and punchy tunes with gusto, and the gig was both playful and tightly executed. Lots of heartwarming interaction with the fans and some infectiously catchy compositions filled with nuances made this an outstanding thing to behold.

Given that I am a big fan of the albums Afterlife and Brothers in Arms, I was really psyched about watching Sunstorm perform, and I was not disappointed in the least. Although not the tightest group on stage, they sounded powerful, and Ronnie Romero wielded his vocal-magic with class and style. I am thrilled that I was able to see this quartet in a live setting, and one can only hope that a European tour is in the works as their enticing tunes deserve to be aired in settings such as these.

NWOBHM outfit Vardis played the main stage next, but after twenty uneventful and somewhat underwhelming minutes we opted for Kinstrife instead as they had just kicked their set off at the Sessions stage. Thick, massive riffs and a crushing groove sum these guys’ unique sound up rather nicely, and we had a fabulous time in their company. They were clearly having a ball too, and there were laughs all around. A good heavy metal band for sure.

The Treatment took command of the whole venue and melted our faces. I fucking love these raunchy rockers, and their high-octane, no-holds-barred assault on the senses is exactly what the world needs right now. Exhilarating, raw, undiluted rock ‘n roll spirit channeled through five madmen on stage who want to make sure that you are having the time of your life. Judging by the crowd’s ecstatic response throughout, I think it is fair to say that people loved every frigging second of it. Waiting for Good Luck, which is my favorite LP by the ensemble, was sufficiently represented in the set and so my wife and I were happy campers. Stellar stuff and one for the history books. Utterly compelling!

Crazy Lixx from Sweden were the final act on stage, and the glam metal material of theirs is always fun and entertaining to experience. Potent and well-played though it was, it felt slightly anticlimactic following The Treatment, and the performance itself never became enthralling or dazzling. Like I said, we had a good time, and they were fun, but Crazy Lixx did not manage to reach those stratospheric hard rock heights that I was hoping for. Cool without being remarkable if that makes sense.

WinterStorm was a fantastic experience. Good food, great beers, and even better music – what more could one want or wish for? What a lovely, lovely weekend that was.

FANS OF THE DARK – Suburbia

ERADICATE – Demise Towards the Dasein