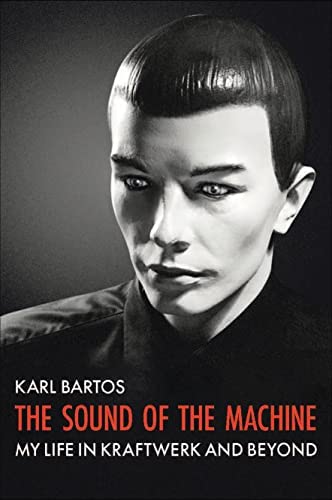 KARL BARTOS – The Sound of the Machine: My Life in Kraftwerk and Beyond

Renowned artist Karl Bartos, who is undoubtedly best known for his pioneering work with the German avantgarde outfit Kraftwerk, published this mammoth 634-page autobiography of his a few months ago, and it turned out to be an informative read and a bit of an eye-opener in many ways yet not one without flaws.

Told with warmth and sincerity, Bartos takes us through the childhood years in post-war Germany to his infatu­ation with music in his teens and then further on to the intense studies at the music conservatory, his remarkable career with electro rock legends Kraftwerk, and finally these last few decades as a solo artist. The tone and aura of the narrative is appealing, unpretentious, and occasionally intimate, but our protagonist rarely reveals too much of himself, which is to say that it does not quite feel as if we get to know Karl personally or gain a proper understanding of who he really is underneath it all. It is an interesting portrait yet one that feels lacking in emotional depth and substance. As illuminating as the chapters on the workings of Kraftwerk in the studio and on stage are, one is often left with the impression that a lot is left unstated by Karl and that he is holding something back, which can be rather frustrating and makes for a monotonous and strangely anticlimactic read from time to time. Much of its content revolves around music theory, the use and implementation of various instruments, modern technology, and software. Frankly, a substantial amount of this comes across as superfluous and without purpose or significance, and it tends to ruin the flow of the text and kill its momentum. However, there is plenty of good stuff for you to devour and digest here too, namely Karl’s philosophical musings on the wonders of sound and how it impacts our minds and bodies, the power of visuals in conjunction with music and the way in which they complement each other, touring Eastern Europe behind the Iron Curtain and life on the road in America, the positive effects of riding bikes and running long distances, his guest professorship at the UdK in Berlin, and the presence (or absence) of chemistry when jamming with others. The restless creative brilliance of early Kraftwerk is discussed in an almost poetic manner and the chapters detailing the creation of the albums Computer World and Electric Café are engrossing and deeply fascinating. Perhaps the most charming and memorable aspect of The Sound of the Machine is the way in which it brings our main character’s profound love of music to life, which is a beautiful thing in and of itself. Vital, funny, and disarmingly candid in some aspects, the book gives the impression that Bartos is a sharp-witted, humorous, and gentle soul who makes for delightful company. Again, the searing honesty oftentimes feels absent when delving into the matter of understanding the interpersonal relationships of being a member of Kraftwerk, but nevertheless, fans of the group and Bartos’ own musically diverse works will undoubtedly want to read it.

Not impenetrable but still an enigmatic artist, this autobiography is equally frustrating and attractive, and while illuminating in some areas, it appears to leave a lot unsaid in others. Those of you who crave details and are captivated by the technology associated with Kraftwerk’s timeless outputs from that golden era will find this piece of literature deeply satisfying.