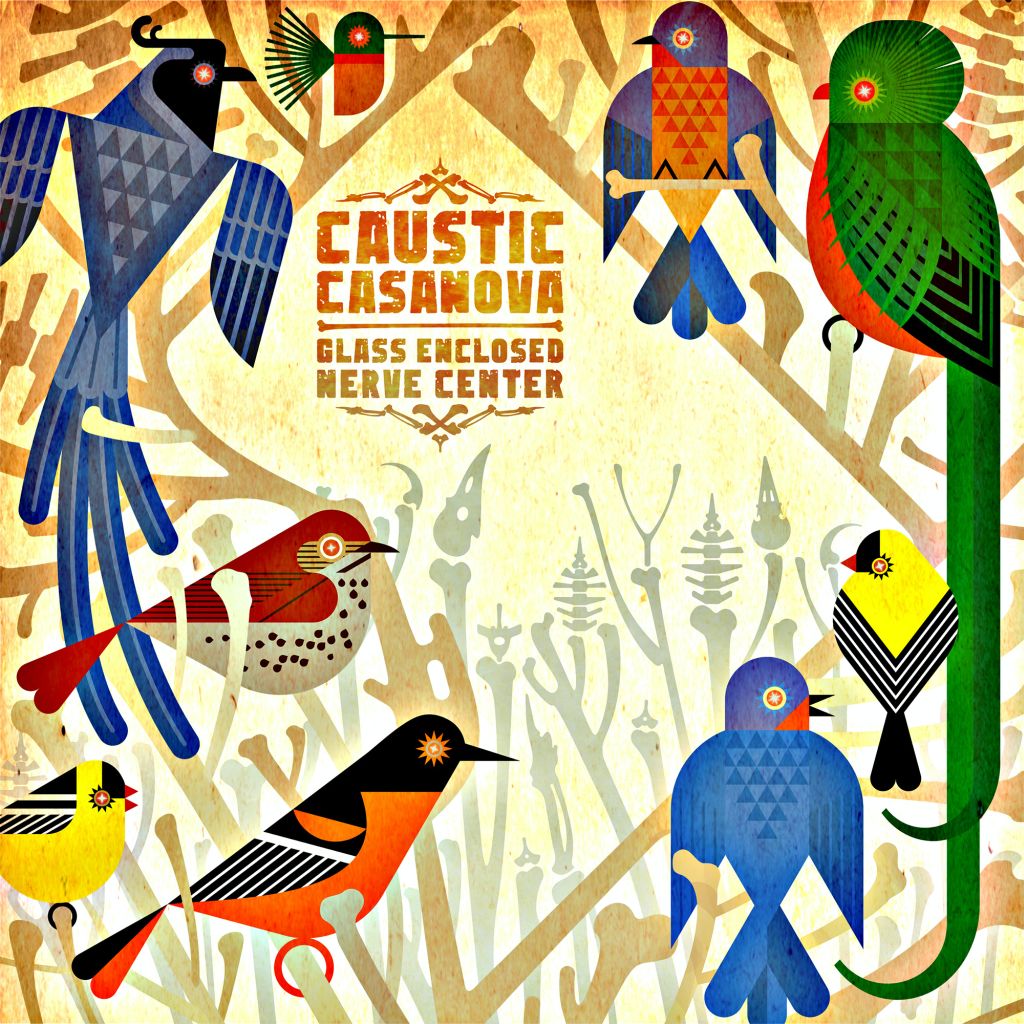 Washington, DC rockers Caustic Casanova’s “Glass Enclosed Nerve Center” comes out on October 7th through Magnetic Eye Records on various vinyl formats, CD and digital. It’s one of the quirkiest, ballsiest, most fun things one can work with when it comes to album releases.

The musicianship is off the charts, the riffs are massive and angular, and the hooks swerve from disgustingly sweet to Melvins-ian.

Caustic Casanova’s music is noisy, catchy, punky, and ambitious as hell.  They find a groove and ride it, or bang it around in a blender and spit out something so jarring you have to check the time index to see how far into the song you are and try to remember how it started. These adventurous riffonauts display an expansive range of sounds into their tight, hyperkinetic core and explode them outward in a kaleidoscope of progressive heavy rock exuberance. Their sharp and exultant math-meets-noise rock prowess fuses with towering sludge metal grooves, as if Sonic Youth and The Melvins went into a space trip with Kylesa and Helms Alee. Fun, unexpected and definitely addictive!

It’s not that they’re trying to be weird or showing off how clever they are.  Being weird and clever is as authentic to them as brutal grooves are to Weedeater (who Caustic Casanova once covered, because, as was said in 8mm, they could).

Formed in 2005 as the trio consisting of drummer and vocalist Stefanie Zaekner, bass-player and singer Francis Beringer, and guitarist Andrew Yonki, CAUSTIC CASANOVA‘s chose a path to constantly refine their thrillingly unpredictable music, which careens from sardonic noise rock to proggy sludge in the vein of Baroness, Red Fang, and Torche, while also taking inspiration from the gargantuan heft of Melvins to Boris, and fleet guitar heroics with flashes of dark-hued post-punk. After a number of proudly DIY releases, CAUSTIC CASANOVA caught the attention of Kylesa, who released the band’s third full-length “Breaks” through their own label. Having brought their pure rock fury to the riff-thirsty masses on more than a dozen full and regional US tours, CAUSTIC CASANOVA applied their road-honed chops to bang out a heavier, more joyously swaggering set of righteous songs for 2019’s triumphant album “God How I Envy the Deaf”.

With the addition of second guitarist Jake Kimberley in 2019, the now-quartet set their sights on making the most adventurous and prog-rock CAUSTIC CASANOVA record yet. “Glass Enclosed Nerve Center” underscores all their strengths, while making the most of the expanded line-up that opened up their sound to new possibilities. Beringer’s reedy, melodic bass dances heavily alongside the two frying guitars to empower a trio of lead voices. Zaenker’s percussion is powerfully inventive across the album’s five expansive songs, sounding equally at home in swinging, Bill Ward stomp as in math-rock jitteriness.

Long-time travellers in CAUSTIC CASANOVA‘s orbit will doubtless find “Glass Enclosed Nerve Center” an exhilarating welcome back that includes the ambitiously sprawling, 22-minute epic ‘Bull Moose against the Sky’ which occupies the album’s entire B-side. Yet those new to the massive sound of these raging psychedelic sludge buffaloes will find outstanding songcraft and rich storytelling worth every second and countless repeat spins. Three, two, one… go! “Glass Enclosed Nerve Center” was recorded & engineered by J. Robbins at Magpie Cage, produced by J. Robbins and Caustic Casanova, mixed by Andrew Schneider at Acre Audio and mastered by Dan Coutant at Sun Room Audio. Artwork was designed by Scott Partridge