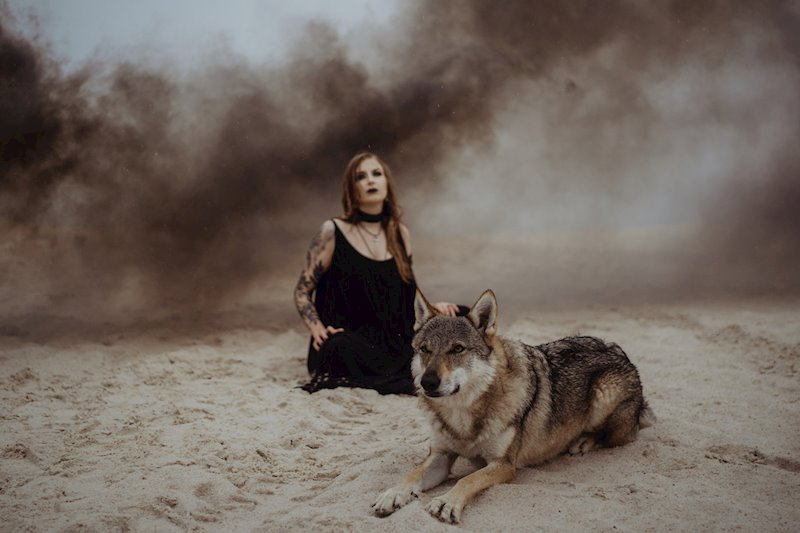 Out on 20 October via Pagan Records. Pre-order available NOW

Ols, the one-woman dark neofolk project from Poland, has announced that the new album “Pustkowia” will be released on 20 October via Pagan Records. This will be the fourth studio album from the project, and the second one for the label. Pre-orders for the album can be made via the record label’s webstore.

“Pustkowia” (“Wastelands” from Polish) takes the project to the next level and brings more of what Ols stands for. It is darker, heavier, bolder and more varied, but also sadder, more emotional and extremely personal. The common denominator linking all the compositions is emptiness: abandonment, dying out and decay, both in the literal sense (abandoned places, deserted settlements, ruins consumed by greenery) and metaphorical (emotional emptiness, rejection, exclusion).

Musically, each track on the album is different; from metal-like pieces, through disturbing ritual chants, to mesmerising, trance-like lullabies. As on the previous records, the song arrangements are based on polyphonic vocal parts, accompanied by a whole gallery of instruments. On “Pustkowia”, typical dark-folk instruments with ritual drums, a brass section and drone bass have been enriched with solutions from the metal yard, and in the vocal parts include growls, screams and shrieks, emphasising the emotional nature of the songs.

Ahead of the release of the album, Ols has unveiled the first single and music video to the track “Pustacie” (“Empty Lands” from Polish): https://youtu.be/zAATw9YGLqY

Ols has commented about the music video: “In the empty space, in the white desert,  a lonely woman and a she-wolf are wandering. The smoke of the scorched earth swirls around, the sand is made of the ashes of a dead world. This post-apocalyptic vision is a vision of the future where inevitable destruction lurks. In a local, earthly sense – an ecological catastrophe, in a broader, cosmic sense – entropy and heat death of the universe. Everything is moving towards the ultimate void. Life is only a temporary anomaly in infinite non-existence. Humanity bestowed with painful self-awareness can just wander aimlessly through the wastelands, knowing that the only destiny is going to nowhere.”

The album is dedicated to those who do not have a voice. “You can hear the voices of those who are excluded, rejected, forgotten, persecuted”, added Ols. “Voices belonging not only to people, but to other inhabitants of the earth, dying as a result of homocentrism, religions that put man above all else, and social consent to the destruction of the weaker, who cannot defend themselves. The vision of a barren land is accompanied by personal threads related to rejection, loneliness, depression and suicide. Many of these topics are explored for the first time in the works of the Ols project. It’s a very personal album, but it also leaves room for listeners’ own interpretations.”