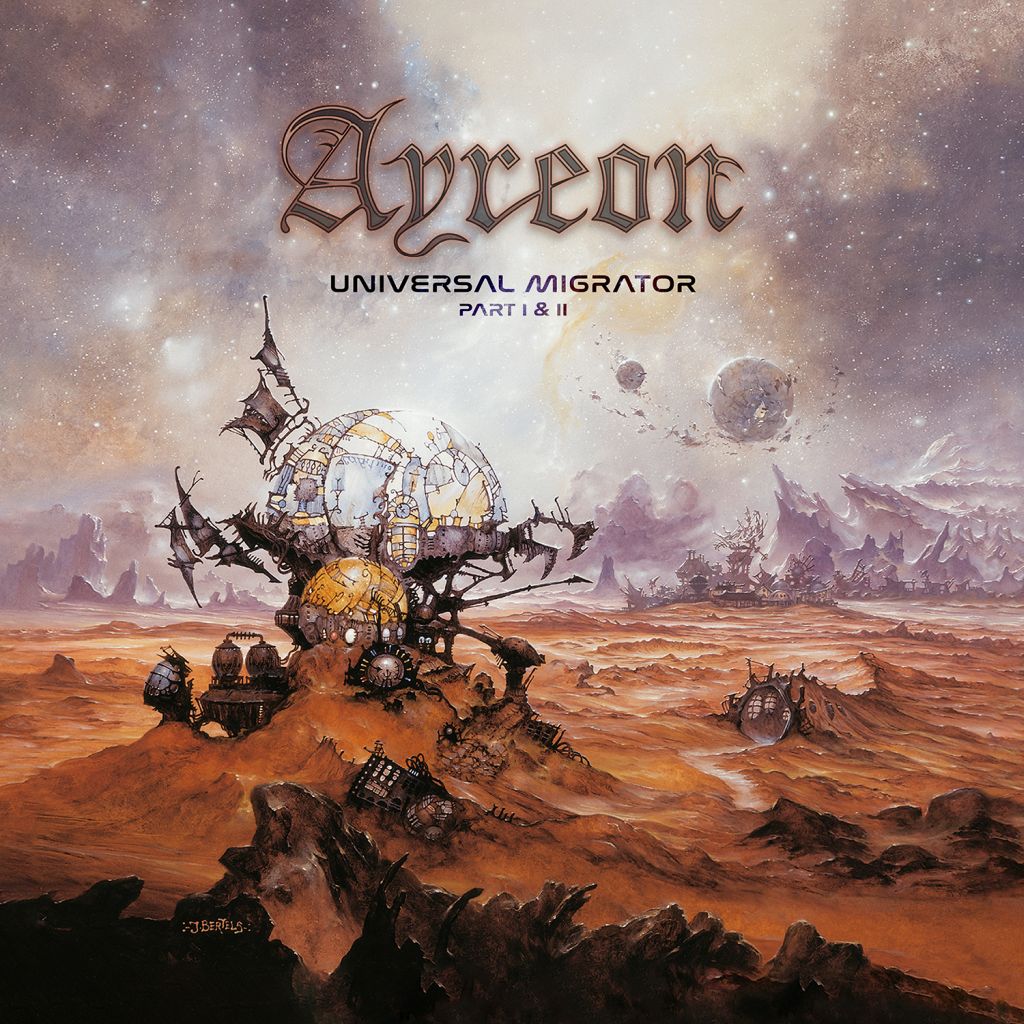 You can pre-order the album here:  https://lnk.to/Ayreon

It will be released on multiple formats – 1) A limited edition 56-page artbook including a 40-page comic, exclusive images of “the process”, 5 CDs (including previously unreleased audio) and a bonus DVD with 5.1 surround mix, 2 binaural headphone mixes and more. 2) A vinyl box set with 4 LPs on marble vinyl in 2 gatefolds, a 40-page comic book, a bonus DVD, a double-sided poster and a sticker sheet. The vinyl box set is limited to 1000 numbered copies webshop exclusive). 3) 2CD + Bonus CD. Additionally, “The Dream Sequencer” and “Flight of the Migrator” are available separately on 180-gram transparent vinyl and digitally on all platforms. The bonus CD will feature an hour of previously unreleased material, ranging from versions of the tracks with different (guide) vocals to entirely new (well, old) tracks that didn’t make the albums and were previously never released.

Universal Migrator Pt 1: The Dream Sequencer and Universal Migrator Pt 2: Flight of the Migrator were released initially simultaneously in 2000, following the majestically sprawling hit album Into the Electric Castle two years previously. The Dream Sequencer continues the plot from The Final Experiment (1995), starting in the year 2084 when the final world war wiped out all life on Earth. Flight of the Migrator continues the story of the last living human being, the colonist on Mars and his decision to use the Dream Sequencer machine to travel back to before the universe was formed.

Ayreon mastermind and Dutch multi-instrumentalist Arjen Lucassen remembers, “‘Into the Electric Castle’ was such a huge worldwide success that when I picked up the guitar to start working on the next Ayreon, I was terrified! I realized it would simply be impossible to recreate the magic of that album. So, instead of trying to make an ‘Electric Castle part two,’ I looked for new and challenging ways to create my next Ayreon album.”

He continues, “First, I decided to have each vocalist perform one individual song instead of using multiple singers interacting within the same song as I had on previous Ayreon albums. Second, I decided to separate my two extreme styles and make two contrasting albums instead. ‘The Universal Migrator Part 1: The Dream Sequencer is a melodic and atmospheric journey through time, and ‘Universal Migrator Part 2: Flight of the Migrator is a heavy progressive adventure through space.”

“Ayreon fans come in all shapes and sizes, but I believed that overall, there were two distinct groups: the prog fans and the metal fans,” he explains. “By releasing these two albums separately, I wanted to give each group a chance to buy the album of the style they loved and, if they wanted, ignore the other. To my (pleasant) surprise, most fans loved both albums!”

Talking about “Into the Black Hole,” Lucassen says, “Into the Black Hole is one of my personal favourite songs on the Flight of the Migrator album. Particularly because of the amazing vocal performance of the mighty Bruce Dickinson. It was a true honour and pleasure for me to record one of my favourite singers of all time in my studio. I love that his singing in this track is so different from the (often faster) Iron Maiden material. If you listen well, you can hear that in this remixed version, I used some vocal lines that I didn’t use in the original version. Have fun exploring!”

The album cover and 40-page comic book were designed by Spanish artist and friend of Arjen, Élan López. “It’s an epic story!” Arjen says. “We worked on this together for three months, and we’re proud of the result. It’s cool to see the complex story portrayed now in beautiful colours.”

When approaching the considerable task of remixing and remastering the albums, Arjen had to dig through his attic and unearth his ADAT recorder and all the old 8-track ADAT tapes. He then had to import the audio of all 70 tapes (40 minutes each) into the computer. Not a job for the faint of heart!” he says. “But once I was remixing, I enjoyed revisiting the recordings and all the memories that came up as I worked.”
Arjen Lucassen continues his crusade of remixing and remastering his finest work to absolute perfection and Universal Migrator, Pt. I & 2 (2022 Remixed & Remastered) is a stunning addition to his spectacular canon. Thanks to advancements in technology, fans can now get the chance to hear the albums through the ears of Lucassen as he intended them.