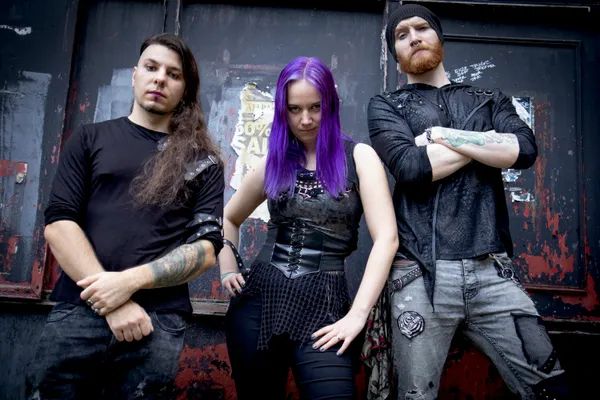 2022 has seen Novacrow’s triumphant return from lockdown. They won Merseyside’s Metal to the Masses 2022, and have a brand new album ready to unleash, alongside appearances at Hard Rock Hell Ibiza, Liverpool Tattoo Convention and Bloodstock.

Following the successful release of ‘Novacrow Volume 1’, their new album ‘Look At Me Now’ was written and recorded across lockdown. It aims to showcase the best of Novacrow’s eclectic sound, with a wild blend of genres, infused with horror influences and a touch of humour. It features Scare Tactics’ Stu Barker on drums.

Introduce your band, and describe your latest release:
We are Novacrow, a deliciously arousing alternative metal band based in Liverpool, UK. Our latest release is ‘Hollow Armour’, which is our first single off our upcoming debut album ‘Look At Me Now’, (which you can pre-order from our website RIGHT NOW). It’s a bit of a departure from our previous singles in that it showcases our more earnest side, but still has that Novacrow charm that we’ve come to be known for.

What’s the hardest part about being a band in this day and age?
As a fully independent band, we really can’t just focus on the music. We have to be our own managers, social media managers, content creators, we have to deal with all the PR and merchandise, and we gotta deal with admin all on our own. And the more you progress and the better you want to be at doing things, the harder it gets to keep on top of all these aspects of being a musician without any help. We would love to just focus on our live performances and our craft, but unfortunately somebody has to design and order t-shirts, somebody has to direct our music videos, somebody has to deal with copyright, and since we can’t afford to pay someone else to do these things we have to do them ourselves. Which takes up….a LOT of time.

When did you realise that your project had the potential to be much more than just a fun idea?
From the very beginning. Whilst we love what we do and we have an absolute blast doing it, we are also all very driven individuals. We’ve always wanted to take this as far as it can possibly go.

Tell us about your latest release, why should we check it out?
Oh boy I’m glad you asked. As the first single off our upcoming debut album, ‘Hollow Armour’ was the prefect song to showcase the standard of excellence we’ve been aiming for with the whole album. Production wise, it’s the best we’ve ever sounded and we’re extremely proud of the sound we’ve achieved (considering we produced, recorded, and engineered EVERYTHING ourselves). The song-writing is also top notch across the whole album, and ‘Hollow Armour’ just perfectly encapsulates the natural evolution our song-writing has taken throughout the years. And finally, it’s got a KICK ASS video, filmed and edited by Sketch Benjamin here in Liverpool. What’s not to love?

How does a song typically come together for you?
Writing ‘Look At Me Now’ has been a lot of sending files back and forth over the pandemic. Freddy and Kitty would send each other demos of songs they’ve written, some more polished than others, and the other person would make adjustments – they might re-structure the song, they might add vocals, whatever. Since Freddy was producing the whole album, he would then do final arrangements for each song and send them back to Kitty and Jonyx until everyone was happy with the demos. Some songs needed a lot more work and needed to be sent back and forth quite a lot, and others were pretty much 90% completed from the get go.

How would you describe your sound to an unfamiliar reader?
Juicy, like a refreshing pear just ripe with sweet, succulent waters. Our sound has been scientifically proven to cause intense arousal in all listeners. It’ll serenade you one second by whispering sweet melodic nothings into your earholes, and it’ll slap you across the face and call you a whore the next. And you’re gonna love every moment of it.

What do you want listeners to take away from listening to your band?
Just sit back and enjoy the ride, CUS IT’S GONNA BE A WILD ONE!

Where would you really like to tour that you haven’t done so yet, and why?
We’ve pretty much toured all of UK at this point, and we’ve done a few shows in Europe here and there. That said, a full European tour of Germany, Italy, France, the usual places would be dope. Touring South America would be fantastic as well, just to spice things up!

How would you say that the sound of your band has progressed over the years?
It’s matured like fine wine. We’ve evolved from being the moody teenager in the family to being the wacky drunk uncle that’s always fun to be around but has also clearly got some issues he needs to sort out.

How excited are you for 2022, and what can fans expect from you?
Well, we’re currently prepping to play Bloodstock next week so that’s gonna be SUPER exciting! Otherwise, we got another couple of singles that will be released in these next few weeks, along with brand new music videos. Our debut album ‘Look At Me Now’ will be released towards the end of September (although you can pre-order it RIGHT NOW over at www.novacrowofficial.com/store ), along with BRAND SPANKING NEW MERCH, and then we’ll focus on touring on the back of the album and get spreading the good word.

I THE BETRAYER – Intervju for LEGEND METALFEST 2022