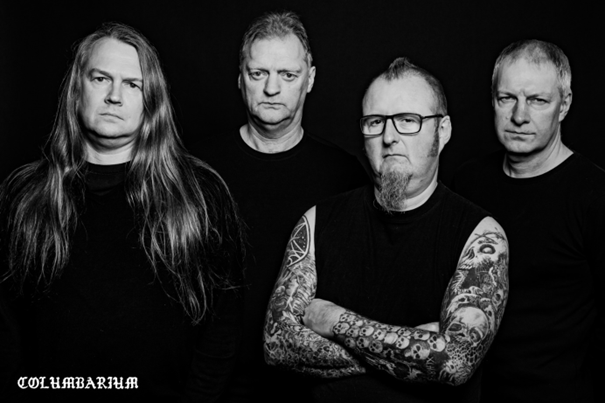 Columbarium is a Belgian (from the village of Zwevegem) heavy Doom band which found its birth midst 2021, but was conceived of seasoned members from the doomscene since over ten years. Having played about a 100 gigs in a former setup in Belgium, the Netherlands and France with bands like The Gates Of Slumber, Nekromant, Marche Funèbre, Serpent Venom, FAAL, Famyne, King Hiss and at fests like Little Devil Doom Days etc., they have built a serious reputation as a live act in the last decade. The addition of an extra guitar/keyboard player some years ago (Koen Biesbrouck also from the avant-garde, instrumental band Locus Control) has taken the music to another horizon and the newfound sound of the band recently was the cradle for the bands rebirth. Columbarium found that sound in engaging with Belgian producer Lander Cluyse from Hearse Studio (Amenra, Aborted …) and with Brad Boatright from AudioSiege Mastering Studio (US/Portland who worked with the likes of Monolord and Pigdestroyer …). Together they found the sound they have always dug for in the Flemish clay. Columbarium played their first gig at the end of September 2021 with brothers in arms funeral doomband FAAL at the well-known underground club Little Devil in Tilburg/the Netherlands. Being the first gig in over two years it was a memorable evening in a sold-out and very cozy setting.

As a teaser to the bands’ music Columbarium independently released a lyric-video for the song “Rivers Of Blood” on the 17th of December 2021. It got noticed by Belgian independent label Dust & Bones Records and it was very quickly clear that labelmanager Frederik Vanhee and the boys were assimilated minds in being metalfreaks in heart and soul and having passed a lifetime of love for all kinds of different metalgenres. It resulted in the release of a first single “Rivers Of Blood” with the title track and, even though it’s not, ‘B-side’ track “Save Our Children”. It was released on the 23rd of May on very limited & handnumbered cassette and digital streaming and download. The release is supported by a visualizer for the brand new song “Save Our Children” which saw the dawn of day on the 23rd of May.

The single is still meant to be a ‘getting to know the band’ before they will release a full album later which is being recorded at this very moment. The drums have been done already in April at ‘The Art Factory (Studio 9)’ and the pre-production for the guitars is done as we speak. After all recordings are done, the music will be handed over to Lander Cluyse for the production and mastering and the album should be finished somewhere around August/September 2022.

Bass player/vocalist Pete states: ‘It feels rather uncomfortable to describe your own music and actually we don’t like doing so, but we go through life as a heavy doom metal band with influences ranging from blues to some early slower death metal. To say it with the words from one of our good friends William Nijhof, ‘A super combi between miserable and brutal!’.

Written and recorded by Columbarium

Lyric-video for ‘Rivers Of Blood’ and visualizer for ‘Save Our Children’ created by Ultra Organic Studio.