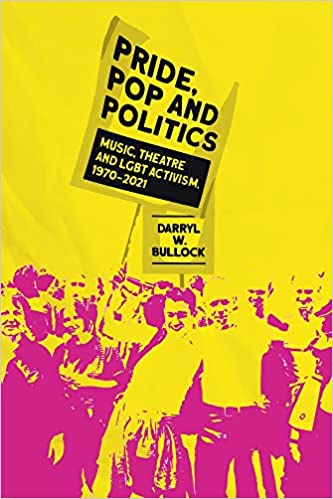 Yours truly was enthralled by author Darryl W. Bullock’s previous book, the thought-provoking and illuminating “The Velvet Mafia: The Gay Men Who Ran the Swinging Sixties” (2021), which turned out to be one of that year’s literary highlights. Needless to say, I was very much looking forward to digesting his latest creative effort, namely “Pride, Pop and Politics”, which is an exhaustive and revelatory study of the interrelations between LGBT politics and the arts in the UK and how they are inextricably linked, more specifically how music and theater have influenced LGBT activism for decades and vice versa. Stating things in such simple terms as I am doing here feels wrong and superficial simply because Bullock’s work is so incredibly well-researched, in-depth, and reflective that it goes way beyond such terms as “analysis” and “discourse”.

Being a treasure of information that will force you to sit up, pay attention, and take notes is obviously a huge part of its magnetic pull, but the flow of everything and its cohesiveness make it a real delight to immerse oneself in, and Bullock has a way with words that sucks you in and leaves you wanting for more by the end of every chapter. I do think there is a slight imbalance at times where certain music-related aspects are touched on and briefly covered but one is left with the feeling that there is infinitely more to the story and wish that the author would have delved further into the subject matter. However, this minor criticism of mine merely comes from me being captivated by various parts of the book that really spoke to me and then ended way too soon. I found the discussion on punk rock and that scene’s ties to the LGBT movement both particularly arresting and worth further exploration. There are a few instances where the politics completely dominate the picture and outweigh the arts-related perspectives and angles, but again, this does not change the fact we are dealing with an impressive account of how and why LGBT politics and the arts have helped bring about change in Britain over the past fifty years while also highlighting the fact that there is still a long way to go and that certain present-day challenges need to be overcome.

“Pride, Pop and Politics” is nuanced and inspired, and there is an uplifting quality to it. Make sure you grab a copy of this beautiful hardback edition.