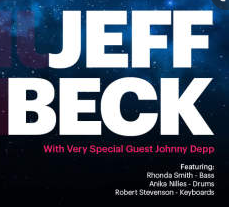 The legendary guitarist that is Jeff Beck surely needs no introduction as the man has been a musical pioneer and trailblazer ever since the early sixties, and yours truly was very excited about seeing Beck and his talented cohorts grace the stage at Bergenhus Festning in Bergen on a slightly windy and rainy Sunday evening along with three thousand other attendees.

Given that Beck and Johnny Depp (Hollywood Vampires) have collaborated on an album that will be released in just a few weeks’ time, it makes perfect sense that the latter has joined the tour as a special guest. This basically means that the show is divided into two parts; the first forty minutes contained instrumentals that were delivered with class and sophistication by Beck and the rest of his ensemble while the remaining thirty-five minutes featured various tunes with Johnny handling vocals and rhythm guitar, one of which was an original piece from their upcoming LP and the rest of them being intriguing and interesting cover renditions. While some might think that things lacked cohesion as a result of this, I thought that it added a wonderful element of surprise and unpredictability to the concert, and on top of that, it added musical variety to the event. The instrumental set, which also consisted of both originals and covers, highlighted just how colorful Jeff’s unique playing is and how effortlessly he bridges the gap between blues, jazz, funk, and rock music. Obviously, he left his own stamp on every note and nuance, and I found it quite mesmerizing at times. It is all about the music with these guys and there was neither a backdrop nor any stage banter as such, but the concise playing and the minimalist setup seemed to complement each other rather nicely and worked like a charm.

A highlight of the performance was the interplay between bassist Rhonda Smith and drummer Anika Nilles – it sounded phenomenal when they locked into a groove, and it was a real treat to experience their playing in a live setting. The chemistry between Beck and Depp was also very much present on stage, and you could easily tell that they were having fun and enjoyed jamming together. Johnny may not be a brilliant singer per say (nor the tightest guitarist for that matter), but he poured his heart and soul into things and added passion to the material. What about standouts with respect to the set-list then? The funk-esque “Stratus” (Billy Cobham), the trance-inducing “Rumble” (Link Wray and His Raymen) and the punchy “The Death and Resurrection Show” (Killing Joke) were excellent while the emotive “This is a Song for Miss Hedy Lamarr”, which is an original penned by the two gentlemen, served as the most touching moment of the evening.

Although the gig never reached stratospheric heights, it was a hugely enjoyable night, and the display of talent all around was undeniable. As an added bonus, the sound was superb where we were standing. Memorable is the keyword here.

MISFIRE – Sympathy For The Ignorant