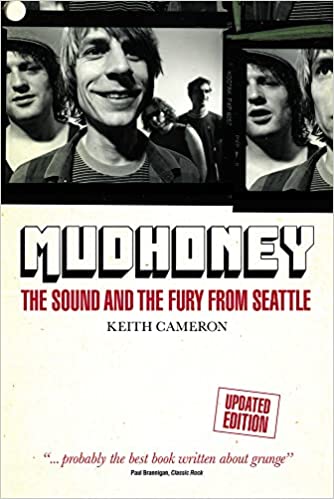 This revised and updated edition of Keith Cameron’s book on the legendary Seattle rockers Mudhoney is a most welcome addition to the bookshelf, and its title is an apt one.

Cameron’s work is Incredibly detailed and imbued with an ability to paint a vibrant and exciting picture of the nascent Seattle grunge scene and how it evolved over time while never losing focus on the role and importance of Mudhoney with respect to said genre. Drawing on numerous interviews with past and present members of the band and everyone in their orbit, this one reads like the definitive account of the somewhat underappreciated trailblazers who inspired (and arguably also paved the way for) numerous punk rock/grunge/alternative rock acts that would go on to find great success. It is easy to forget just how much of an impact Mudhoney had on the burgeoning grunge milieu, but people also tend to overlook the fact that the seemingly unstoppable musical quartet is still out there today, composing new material, releasing albums, gigging, and defying all trends and fads. Their songs and lyrics have often mirrored social and political upheaval but in a most clever and fascinating manner, which makes for a great topic of discussion and analysis in this book. From being kids to becoming teenagers infatuated with punk rock and starting their own bands and further on to the launch of Mudhoney and everything that followed in its wake, Cameron’s work is a treasure trove of knowledge and trivia that explores all things Mudhoney while containing just the right amount of wit and warmth. The chapters chronicling the chaotic life of Green River and that particular band’s cult following and role in sparking off a musical movement are downright arresting.

In many ways, “The Sound and Fury from Seattle” is as much about grunge as it is about Mudhoney, which is testament to the author’s ability to view the pioneering group’s influence and status in a rather wide perspective and thereby weave a rich and interesting narrative together that encompasses so much more than mere biographical details. No stone is left unturned, and I can think of no better examination of (and introduction to) the loud and gritty outfit’s storied career than this one. If you are about to read the book for the first time, prepare to be thrilled by its vigor, clarity, and enthusiasm.