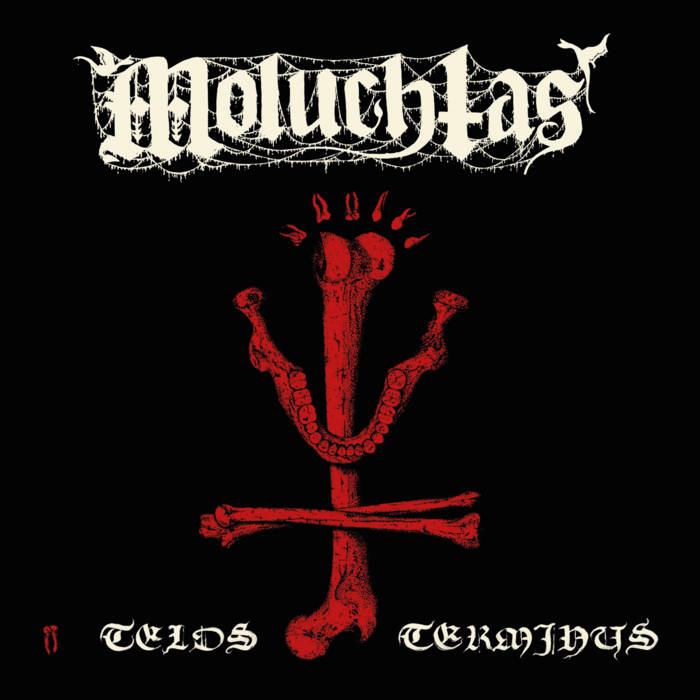 Eight menacing and twisted black/death metal hymns with trance-inducing qualities and inhuman vocals are what we have here, and this compilation, which contains two different EPs, by the Belgian entity known as Moluchtas is a delightfully nihilistic piece of work.

With its pitch-black atmosphere and semi-repetitive riffs that cast a dark spell on the listener, listening to “Telos Terminus” is akin to being lost in a void or caught in a vortex, and I am telling you right here and now that you will love it. The songs are memorable and everything unfolds and evolves in an organic manner. The aura is claustrophobic and oppressive at times, and the disembodied vocals work incredibly well on top of those loathsome, hypnotic riffs. It may strike you as being monotonous at times but if you listen closely, you will discover a myriad of subtle details and nuances, shades and shifts. Highly effective and impossible to shake, this is some all-consuming and borderline transcendental stuff if you are in the right frame of mind to truly appreciate its authentically negative vibe. I would argue that it veers more toward black metal than death metal, but that is less relevant than the fact that the disc rules beyond belief. Definitely recommended to all you underground maniacs out there who crave darkness.