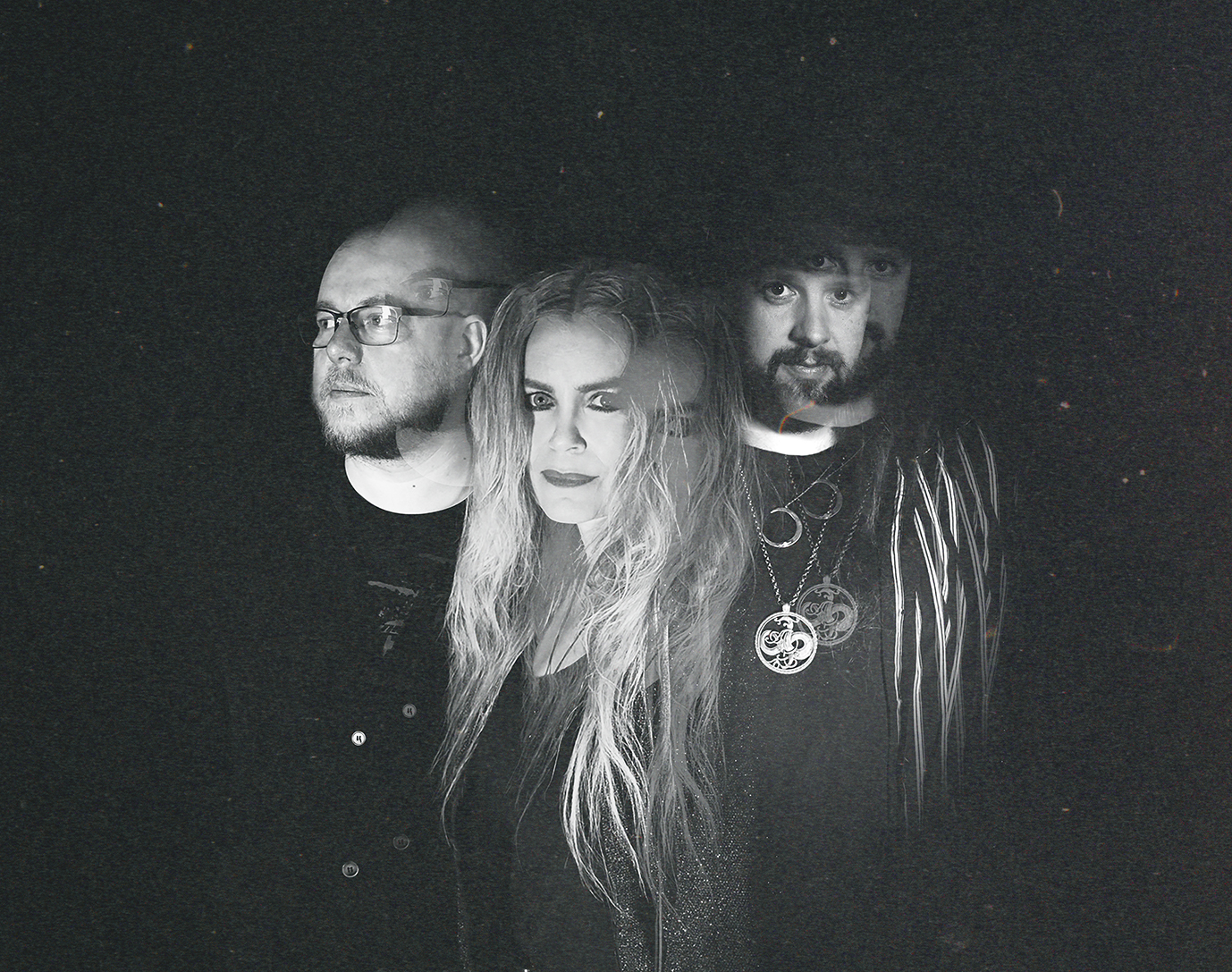 A wicked 6-track EP entitled “Solstice” by the Norwegian doom metallers/psychedelic stoner rockers Superlynx landed on my desk in early December last year, and I was pretty much hooked the very minute I started listening to it. The talented trio have released some utterly impressive and original-sounding works in the past – all of which you ought to check out asap – but “Solstice” is something else entirely in that it is comprised of two original compositions and four dynamic and rather compelling cover tunes. We caught up with vocalist/bassist Pia Isaksen in order to learn more about their latest musical output.

Greetings, and thank you for taking time out of your schedule to talk to us today. The glorious “Solstice” EP, which was released digitally by Dark Essence Records in early December, is truly a musical gem, and I love the fact that it is a mixture of original material and some wildly creative cover songs. Where did the idea to do something like that originate, and was it a rewarding and interesting experience to arrange the cover tracks the way you did? I think you managed to leave your own mark on those compositions and you kind of made them your own, which is obviously a compliment.

Pia: Thank you so much. After recording our third album in summer 2020, there were very few gigs to play, and we had more free time than usual because of the pandemic and lockdown. We still wanted to keep playing together but weren´t quite ready to start on a new album. When winter came, the idea of booking a studio weekend and record some cover songs came up. Just for the love of playing, and we thought it would be fun to do. It was very cool to do these interpretations. Some closer to the originals, others further away. We just jammed on them until we found a way of playing them that felt right.

With respect to the four cover tunes that are to be found on “Solstice”, which one did you have the most fun with and which one was the most challenging one to arrange? If I had to choose a favorite, it would most likely be “Something in the Way” due to its heartfelt nature and slow, brooding feel as well as its hypnotic vocal melodies and hazy atmosphere. It also takes me back to when I heard Nirvana’s unplugged version of it in 1994-1995 and I recall that I was quite moved by it, just as I am by your version.
Pia: Thank you. They were all very cool to play, but the most fun for me was maybe “Spread Your Love”. It reminds me of fun and relatively carefree times in my 20s, and the song has a really cool vibe. The most challenging one for us stands between “Nature Boy” and “Something in the Way”. The vocals on both of these original versions are outstanding and very much in the center of the song, and I felt it was a challenge to try and do the songs justice with my vocals and get the right vibe.

And what about your own song material when performing that either on stage or in rehearsals; are there one or two that totally work for you on a musical and personal level and get your blood pumping? Any personal favorites and why?
Pia: Yes, I have some favourites that I love playing live. It changes a bit with time, but a constant one is definitely “Center of the Sun”. It is exciting to play because a big part of it is jamming so it never turns out the same. Other favourites of mine are “Hex”, “Breath”, “Indian Summer”, “Rising Flame”, “Electric Temple”, “Moonbather” and “Apocalypse”. These songs have a mood or energy that I find works especially well between us and the audience and they are easy to kind of get lost in.

Superlynx is a trio but who exactly does what in the band and who is typically responsible for composing the music, crafting the lyrics, coming up with ideas for artwork, and so on and so forth? How does the entire process involving songwriting and recording unfold in your camp?

Pia: We all write songs or riffs or parts of songs, both separately and together through jamming. Either way, everything comes together as we play and try out different things together. Lately, it has been mostly jamming and then collectively turning the jams into songs. Ole (drums and vocals) and I write the lyrics, mostly by ourselves but also a few together. I design the covers, but we talk about ideas and go through sketches together.

Given that your music comes across as incredibly warm and dynamic, I simply have to ask whether its organic vibe can be attributed to you playing live together in the same room when in the recording studio? “New Moon”, “Electric Temple”, and “Solstice” in particular are vibrant and lively.

Pia: Thanks! I definitely think so. We always record live and want it to really sound like we are a band playing together in the moment. We sometimes add another guitar later and record the vocals separately, but there is no playing by click track, copy/pasting or such things.

With respect to musical influences, which artists out there inspire all of you in the band?

Pia: The three of us listen to so much different music and have a lot of different influences and we feel like that is really part of our sound and how we play more than being directly inspired by specific bands. Some of the bands we all are at least a little inspired by I think, are Black Sabbath, Jimi Hendrix, Om and Sonic Youth to mention a few.

In 2021 the excellent “Electric Temple” was released, you managed to do a few gigs here in Norway, and the “Solstice” EP was released towards the end of the year. What does 2022 hold for you?

Pia: We just started working on ideas for our fourth album and we have a lot of potential material, so now we are focusing on that. We also have some gigs lined up for spring and hope to add more, and that the pandemic will allow us to play more outside Norway too this year.

Thanks once again for your time.

Pia: Our pleasure, thanks for yours!