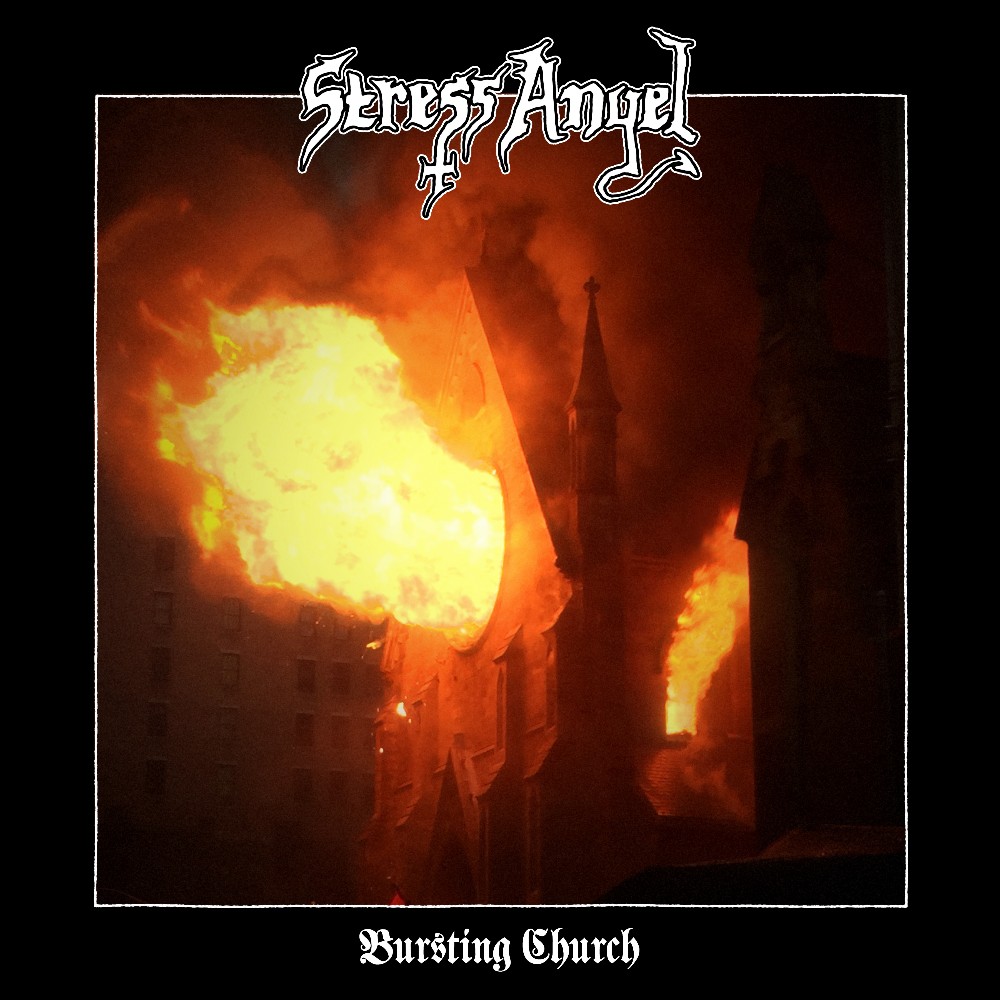 Now, this is a unique name, suggesting an evil spiritual entity behind the phenomenin of human stress. Stress Angel, probably born last year in Brooklyn, NY, quickly had cought attention of Stygian Black Hand which released their eponymous demo (2020) of which all 6 tracks are featured on "Bursting Church", although it is possible, even likely, that the label is actually run by the two New Yorkers only known by stage names: Manny "Tooth Log" Sores (vocals, percussion, drums) and Nicolai Orifice (guitars, fx, keyboards) who make up the whole band (unless you think these are their real names?) Dying Victims released this debut album as a CD and Sygian Black Hand as a vinyl LP.

Looking at the cover and listening just casually to a few tracks on "Bursting Church" you’d think you’re dealing with just an average first two Kreator + first two Slayer albums deathrash and if you want that then the title track and "Final Doom" will definitely hit that spot, but on close examination you’ll hear there’s more than meets the ear on this debut album. Presented here is a deathrash foundation on which to set up monuments to Morbid Angel, Immolation and Asphyx as well as the Peaceville Three (Anathema, My Dying Bride, Paradise Lost) with generous helpings of Merciful Fateful (or perhaps "Peace Sells" Megadethian), Dimmu Borgirian and Behemothian tar black devilry for an interesting if flawed effort.

I can hear them torn between straight "up yours" thrash a’la Metallica’s "Kill ‘Em All" (the excellent melodic "Godless Shrill") or "Ride The Lightening" (the powerful "Exposure To A Disease") and blackened dissonant death metal a’la Immolation’s "Close To A World Below" or Behemoth’s "Apostasy" or even the most recent Revocation, as on the only perfect track and favorite "Life Alert". This track strongly recalls Morbid Angel’s "Sworn To Black" or Revocation’s "Luciferous" with even symphonic hints of "Spiritual Black Dimensions" and "Puritanical Misanthropic Euphoria" Dimmu Borgir. I would also distinguish the melodic "Mohel’s Kiss" with its distinct bass solo recalling Metallica’s "Anaesthesia…Pulling Teeth" and the excellent interlude/instrumental "Providence" with some of the riffing reminiscent of Living Sacrifice’s "Not Beneath" as well as the heavily Peaceville Three and Asphyxian closer "The Human" with its nearly progressive edge and a fantastic closure a’la Metallica’s "The Call Of Cuthulhu". Finally, I should commend Manny Sores on fantastic screaming recalling the original Arch Enemy vocalist Johan Patrik Mattias Liiva which fits this dark foreboding and disturbing music like a glove as well as the very convincing ominous sound which is like no other on the market nowadays, clear, nuanced, aggressive, raw, powerful and murky all at once.

While almost every track has a worthy doomy slowdown and some melody, none of the other tracks really stand out from what Sepultura, Kreator, Slayer or Morbid Angel used to do once upon a time and that is when you remember that this is Stress Angel’s debut album and the best is yet to come. I, for one, am eagerly awaiting further developments as I have taken notice of the tremendous potential.