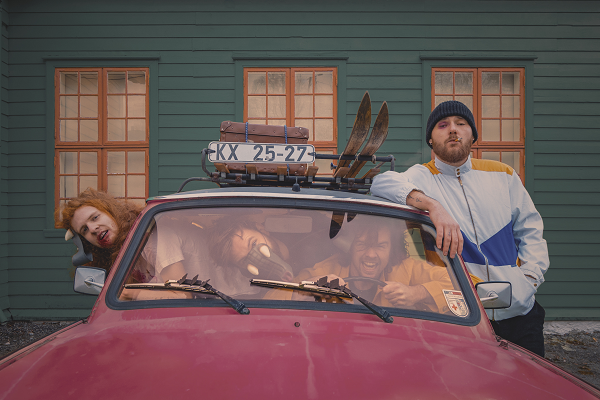 Known for their ability to stretch their sound in a variety of different directions, Norwegian Rockers DOBBELTGJENGER recently announced that their latest album "SMOOTH FAILING" was set for release on Karisma Records on the 9th April.  Welcome news indeed for fans who had been waiting three years for new material from a band whose avowed intention is to bring back not just the Groove, but also the Fun, in Rock Music.

And today, with the release of single "BUILDING SKYSCRAPERS",  Karisma Records offers us another glimpse into what to expect from DOBBELTGJENGER’s third full-length album.  The image created in the mind’s eye by the title of the song itself is very apt for the subject matter,  as the band explains:

Building skyscrapers together with other people and within ourselves takes courage. Meeting and getting close to people is very scary, but incredible and beautiful. The height of the potential fall of a skyscraper and the majestic and impressive nature of them, makes them a perfect metaphor for new and intense relationships.

"BUILDING SKYSCRAPERS", can be streamed or downloaded from a variety of services at https://karismarecords.fanlink.to/dobbeltgjenger_buildingskyscrapers

A video for the single can be seenhere

With "SMOOTH FAILING" DOBBELTGJENGER have come up with an album that is full of catchy songs and funky rhythms, or, as the band says:

An explosive, dark and neon saturated party album, where naive, riff based "the Strokes-esque" themes are met with vigorous grooves and cheeky falsettos. The album is about the gritty "BOOM!"s, manic "FUN!"s, gut wrenching "OH FUCK!"s and terrifying "I LOVE Y…"s of life.

Of course, "SMOOTH FAILING" is not just about fun, manic or otherwise, and comes with  a darker side, as the band recently revealed:

This album has been brewing on different computers for over three years. The record was written in a quite tumultuous, manic and self-destructive period of primus motor Vegard Wiknes’  life. SMOOTH FAILING revolves around the delight and self-deception of doing all the wrong things in your life. It´s a dark party album, made for bad decisions!

With artwork by Klende, track listing for "SMOOTH FAILING" is as follows:

"SMOOTH FAILING"  will be available in Digital, CD, and Vinyl formats and can now be pre-ordered from the following:

DOBBELTGJENGER’s previous single "JOHANNA", can be streamed or downloaded from the following  https://karismarecords.fanlink.to/DOBBELTGJENGER_JOHANNA

Whilst the video can be seen below and at https://youtu.be/bieplRiafAA