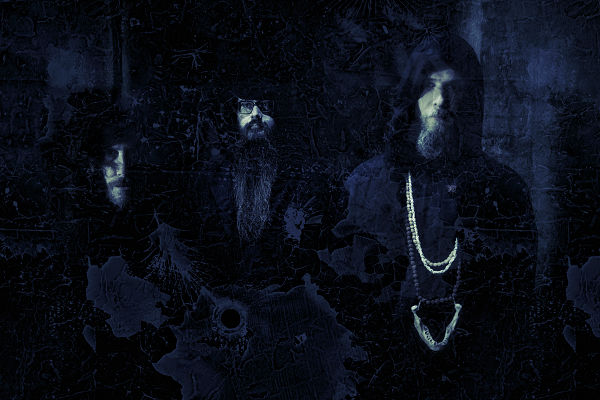 With "Through Aureate Void" set to be released on the 25th February, Dark Essence Records have today released  the single " Leaf in the Current", from what will be FIVE THE HIEROPHANT’s second full-length album.

" Leaf in the Current" is the opening track from the album and this is what FIVE THE HIEROPHANT had to say about it:

It  can be streamed or downloaded from various locations at https://darkessencerecords.fanlink.to/5th_leafinthecurrent

With their use of such a plethora of unusual instruments FIVE THE HIEROPHANT are able to create a sound where psychedelic black metal combines with jazz and doom, leading the listener into drone-like universe shrouded in mysticism and mystery.

And, with their latest offering, the band has followed an even more psychedelic direction, whilst keeping intact the heaviness and darkness that make FIVE THE HIEROPHANT’s music so devastating, as the band recently explained:

It took us longer than anticipated, as you can imagine, due to circumstances that befall us all. Nonetheless, the new album is finished, and ready to take you on a journey through aureate void. It’s quite abstract, and there’s lots of experimentation, both in regard to the sound and instruments used, and to the song structures. A lot of it comes from improvisation and leaving things to chance. I suppose we have taken it further than our debut album.

FIVE THE HIEROPHANT have once again used the work of the legendary Norwegian painter Odd Nerdrum for the album’s cover art, and track listing for “Through Aureate Void” is as follows:

1. Leaf in the Current
2. Fire from Frozen Cloud
3. Berceuse (for Magnetic Sleep)
4. Pale Flare over Marshes
5. The Hierophant (II)

“Through Aureate Void” will be available in CD, LP and Digital formats, and can now be pre-ordered from:

A video teaser for “Through Aureate Void” can be seen below

As well as releasing “Through Aureate Void” on the 26th February, Dark Essence Records will also be releasing for the very first time a vinyl version of the album’s  predecessor, 2017’s  “Over Phlegethon”.  Tracklisting is as follows: