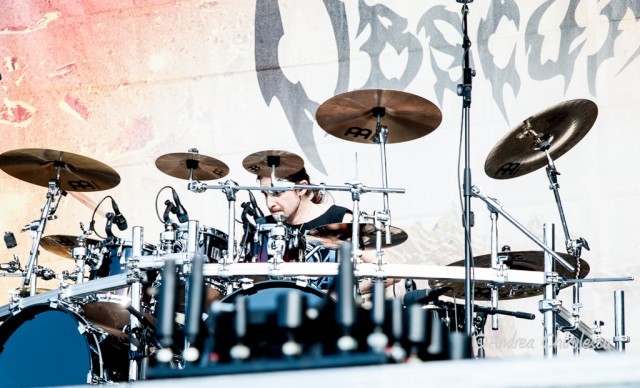 Here’s an interview with Hannes Grossmann, a German drummer known for his technical drumming. He is also a composer and producer who made his name drumming with such bands as Necrophagist, Blotted Science, Obscura, Alkaloid, and Hate Eternal. His most recent solo album Apophenia was released last year, and he is now recording a new solo album.

As a drummer you have played various styles of metal throughout the last years. You’re also a successful composer and producer/sound engineer. Which task and what style do you find the most challenging?
To me it is very important to have an even work balance between writing, producing and drumming. I wouldn’t be satisfied if I just played drums for various bands. My first professional band was Necrophagist and it was extremely difficult to play their music. But it wasn’t the technicality I was interested in in the first place, it was the fact that the music was something unique, something new.

Of course technical stuff like Blotted Science and Necrophagist was the hardest to play on the drums, mainly because it’s fast and complicated. There isn’t any room left for improvisation, unlike in Obscura or Alkaloid. In those bands, being a main songwriter, I have much more freedom to express myself on the drum kit. But then writing and producing is really tough. Especially the last Alkaloid album Liquid Anatomy was difficult. Overall it is probably the hardest record I’ve done, but also the most rewarding. So it really depends. I can say that with every difficult task I have grown as a musician.

What are the albums you are currently working on these days? In which ones do you get free rein to play your parts?
I am working on various albums and EPs of various artists, too many to list them all. But in all of those projects I have a lot of freedom, for I do not accept work that is written out. I mean, why hire me if you have everything figured out already? Probably I can write much better drum lines anyway, since I’ve played the drums for 25 years now.

I do drum session work on a regular basis, so I happen to play on quite a number of records. But I’d like to single out my new solo album, for which I just finished recording drums. Very much looking forward to the mix of that album. Mixing in general is something I really enjoy a lot these days.

Your latest single, "Echoes of Wisdom", is a bit darker. Is it a part of an upcoming album? Is it representative of what an upcoming album will be?
No, not really. This single was just something I did spontaneously. It’s something I felt like doing at the time, but making a whole album like this would be too limited. Maybe someday in the future.

What are the advantages of playing and composing for a more experimental band like Alkaloid when compared to other bands you have played with like Obscura or Hate Eternal with an established style and sound? What do you prefer?
The sound of Obscura wasn’t established when I joined the band, and one could call their sound being highly influenced by my own sound anyway. At some point there wasn’t really anything moving forward with Obscura and I wasn’t satisfied artistically. That’s why I co-founded Alkaloid, to have a band with no stylistic boundaries. Of course that is the most rewarding experience. In Hate Eternal I wasn’t writing music, just contributing my drum skills to make Erik’s vision come alive.

How is it like to play for Hate Eternal and work with Erik Rutan?
It was a really great experience. Erik Rutan is one of the hardest working and most professional people in the metal scene. I am very honoured that I had the pleasure of working with him.

When a band first presents you with a new idea, how do you compose your drum parts?
Well, I am glad if there is some kind of basic drum programming, so I have a guideline. Otherwise it is hard to read the composer’s mind. It sounds kinda corny, but mostly I just sit down and play what I feel like. By trying some ideas I usually develop a drum line pretty quickly.

Which non-metal music do you usually play, and which non-metal drumming styles influence you and in which ways?
I play some fusion music, which I find rather easy to play, compared to all the double kick heavy metal stuff. I’m influenced a lot by funk and fusion, players like Vinnie Colaiuta, Dave Weckl and David Garibaldi.

What do you think are the most important skills in order to become a professional drummer?
Of course it helps if you have a technical advantage, but in general the musical abilities are just as important as being flexible. You need to be able to accept someone else’s ideas and turn those into something useful. Then also it is important to be able to plan your business, to plan your daily routines. And you should be someone that people enjoy working with. So personality is very important. The technique itself is only important as long as you need it for your daily work.

Speaking of techniques, are you currently working on any new techniques? And which techniques have been the hardest to master?
This might be surprising, but I’m not a huge fan of double bass playing. It was always hard for me to do that and find natural movements on my pedals. So I would say, everything foot related to me feels much harder than anything I do with my hands. I’m more a hands-guy. As far as new techniques go, I’m not really interested in that. I’ve come to a point where keeping my technical level is more than enough.

Now that you have reached a high level, how much do you need to practice?
To be honest, I don’t really practice at all. I spend time working on songs. So for example when I need to practise single stroke endurance, I just play some blast beat songs on different tempos. You could call that practising I guess. But I just play.

Do you have any particular routines before every show?
I used to do that, but other than doing some stretching and warming up a little I kinda abandoned that.

Having a lot of touring experience, what’s most demanding when it comes to playing extreme metal live and when it comes to touring? And how do you overcome difficult situations?
It is extremely difficult when you don’t have much time to set up and get used to the drum kit. I had many situations where I couldn’t bring my own drum kit and didn’t have a drum tech helping with the set up. Then there is maybe 15 minutes left to change anything and get ready, no time to warm up. These are situations in which it is obvious that the promoter is not a drummer. Because it’s pretty much impossible to play a perfect show under such circumstances. In general touring doesn’t offer a lot of comfort. So the best idea is to relax and accept just any situation the way it is. Worrying or getting nervous will make it worse. The more experience you have, the easier it is to overcome difficulties.

Tell us about your drum kit, what is the gear you prefer to use and why?
For 20 years I have been using Tama drums and Meinl cymbals. I really like it the best. My favorite piece of drums is my 14″x6,5″ Tama Kenny Aronoff signature snare drum. It is based on a Ludwig Black Beauty, but that Tama snare has the perfect Black Beauty sound, it sounds even crisper and fuller than any Black Beauty snare I have played so far.

Of course I play Vic Firth sticks and Remo Drumheads.

Finally, who would you like to work with for an upcoming album?
Oh man, I have worked with pretty much all the people I admire, so it’s hard to say. But I wouldn’t object to working with Ihsahn. He is a brilliant writer.