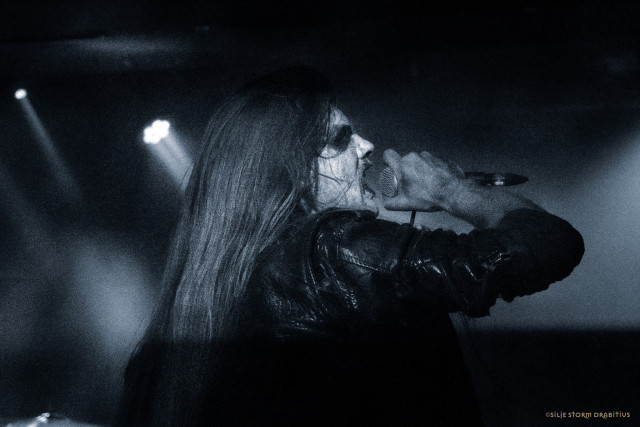 On the occasion of Djevel’s release concert for their latest album called Ormer Til Armer, Maane Til Hode in Oslo, I got to talk to its mastermind T. Ciekals about the particulars behind his musical creations. I think pretty few bands now evoke the Black Metal ambience of the old days in a convincing and natural way like Djevel do. This is one of the reasons I had to include Ormer Til Armer, Maane Til Hode in my year-end list. In this interview there is also some good news not only of Djevel, but of NettleCarrier as well, which is another one of T. Ciekals‘ creations that I consider to be excellent and absolutely recommend to all of you who thirst for dark music.

How long did it take for you to compose and record the latest album?
It took 10 months to compose the album and the recording is usually done during a week maybe, four or five days in total.

Do you compose a lot and then pick stuff later?
I always throw riffs away. I never keep anything unless I’m going to use them for an album.

How does the process of composing work for you? Do you like to receive input from others as you go?
I never ask anyone if they like this or that. I just record the demos for the album and then I give them to the drummer and the bass player and say: "This is the album," then they bring their parts to it when we enter the studio, but we don’t rehearse the songs or anything before we enter the studio. I never know what they are going to do until we are in the studio and that’s rewarding for me because I deliver something and then I get something in return that has developed, but I can only do this if I trust them, and obviously I do. I never work on songs. I don’t sit forever to work on riffs. If the feeling is right, then it’s right. I think there was only one time I told the bass player to change a part. Just one time in six or seven albums.

Do you need a particular setting or mood in order to compose?
Not really. It’s usually very improvised when I make the music. Some of the songs on the last album were done in about 15 minutes. The feeling has to be there, but the setting doesn’t necessarily have to be anything special. Obviously I don’t sit in a park when I do it; I have a room in my house where I do it. But I have melodies in my head when I’m walking in the streets and I just record them on my phone then and there, and then transfer them to the guitar when I get home. A lot of times it just comes to me, sort of, and I just know if it’s something I’m going to use or not. I never sit down to make a song. I just sit down and start playing, if it feels right it can be a song in ten minutes or it can be that I just stop playing and leave the room.

Do you get inspired by something in particular or is it just all in your head?
Nature is an inspiration, of course. I tend to spend a lot of time there. But it’s mainly in my head. It’s the feeling of playing Black Metal when I started in 1993 that is still with me. So it’s that feeling. It is not a particular band or anything, it’s that feeling and how I see Black Metal.

Talking about that, what do you think is the essence of Black Metal, in your own words?
If you take a bit of snow, some branches from a tree, a bible, some parts of the moon, and put it in a big black cauldron. You put that cauldron in a church and set it on fire. When the church has burned down, what’s left in that cauldron would be Norwegian Black Metal.

What’s the message you want to give in the lyrics?
Djevel is mainly about the ancient, heathen Norwegian culture and the ways of devil worship in the old days. I’ve always been into that and I’d like to evoke and preserve that feeling in the lyrics and the music. I’ve never been into aggressive Black Metal. I can listen to it, but I’ve never been into creating it. Of course some of the songs are more aggressive than others, but they are all full of melodies and moods, I think. And that’s the feeling I want to evoke, at least for myself, and if the listener has some of the same feeling that’s good, and if they don’t I don’t care. I do this for myself.

Are you interested in knowing other people’s opinions about the album?
Honestly, no. I appreciate when people like it and support it, but it doesn’t change anything for me. Obviously if I release seven albums and no one likes them, then they wouldn’t probably have been released by a label, so of course it matters for me personally when I create something. I appreciate the support, of course.

How has your music evolved, comparing the last album to the previous ones?
Music-wise I think the song structure has become more developed and more mature, I’d say. Everything fits better together as a whole entity. While on the first albums there were more riffs all the time. That’s the feedback I’ve received from other members of the band, that the songwriting has become better. I think it has something to with the fact that we changed the line-up some years ago and we got more correct dedication, I think. They understand more and better what I want to present, I think.

Have you fulfilled the ambitions you had when you first created the band?
I didn’t have any ambitions, except for recording the album and getting my own copy of the album, and going home. I never had any ambitions for playing live or recording more albums. It has developed naturally in a way. If you had asked me after the first album if I would play live, I’d have said no way. So it has developed in its own way. It’s out of my control.

But do you have any ambitions now or goals you want to achieve?
No, I just want to keep recording albums I can stand one hundred percent behind and feel that it is the best I can do right now. That’s the only ambition I have. I just have to see how it goes.

Do you rehearse a lot, do you have time to do it?
No, we only rehearse before shows. We don’t rehearse like on a Monday for no reason at all. First of all, we don’t have to, because we don’t need it, and that’s good. But what I do is that I constantly create music. I already have the new album, it is done. I have recorded all the demos. So that’s the good thing with doing everything myself and I don’t ask anyone for permission.

Do you have any plans of touring and such in the future?
Not touring, we did that 3 years ago and it was not the best experience. I prefer to do one-off shows, or maybe two or three shows in a row and that’s it. Besides, it takes a lot to do this live. I’m not gonna say we will never do a tour, but mostly it will be shows on a weekend or a festival.

I really like NettleCarrier – what happened with the band?
Thank you! Nothing has happened. I have some new songs. I recorded some demos, but it takes a lot more from me than Djevel. Djevel comes pretty natural – as I have told you, I have even written the new album, even though the last one came only three months ago. But NettleCarrier is much more sinister and dark, both lyrically and musically, so I have to go to a pretty dark place. It brings out the worst in me, so it’s not always a time for that. I don’t know what is going to happen with that, but it’s not over, it’s not dead yet. I have three songs, so maybe there will be a new album.

You know, the negative thing with Djevel becoming bigger than NettleCarrier is that it takes more of my attention. Before that things were equally divided between Djevel and NettleCarrier. I think Black Coffin Rites is my best album yet and if I listen to some of my albums that’s the one I listen to because it’s extremely intense and dark for me.

What other musical projects do you work with at the moment?
I have a project with Nosophoros from Mare, and Ritual Death is pretty Norwegian/Folkish Black Metal. Djevel also has folk music references, but this has even more. It’s really Norwegian in a different way. I also do vocals for that one so I’m working on that. I have maybe five or six songs.vSo I hope to finish that album this year and probably an album will be out next year with that band. It won’t ever be a live band or anything. I just bring out the parts that I think are too folkish for Djevel and put it in that band. I’m constantly combining that band with Djevel, but now that the new Djevel album is written and the demos are recorded I can put all my energy into the other band.