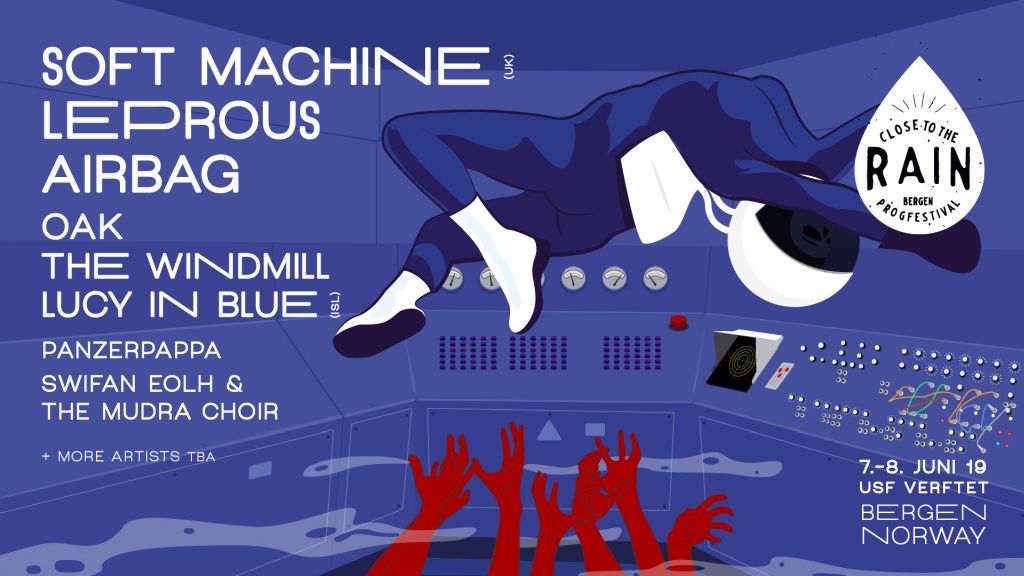 Close to the Rain Bergen Prog Festival (Bergen, Norway), is back with its third edition.
This time in a bigger venue –  the excellent USF Verftet: https://www.facebook.com/usfverftet/, one of the most renowned venues in Bergen. Verftet is known for hosting concerts with acts such as Devin Townsend, Steven Wilson, Swans, Opeth, Katatonia and Anathema, and is equipped with top of the line PA and acoustic treatment.
Being literally by the sea, it is the perfect spot for Close to the Rain.
A total of 8 band will fill the program spanning the 7th and 8th of June, and we’re proud to announce two of the giants from the Norwegian prog-scene: Leprous and Airbag, together with Soft Machine (UK), the legendary Canterbury band for the first time in Bergen.
New Icelandic sensations  Lucy In Blue will also play their first gig in Norway, together with The Windmill, Panzerpappa, The Oak and Swifan Eolh & The Mudra Choir – all excellent bands from Norway, making this a great line-up!
https://www.facebook.com/closetotherain.no/
LEPROUS (Friday June 7th)
With a calendar filled with sold-out shows in Europe and North America, Leprous is quickly becoming one of the lead acts of the Norwegian prog scene. 2017 saw the release of their 5th studio album “Malina” to critical and public acclaim. Since then the band has been touring non-stop, filling venues in North and South-America, Europe and Asia. After a 4 year absence, Leprous is finally back in Bergen, headlining the Friday at Close to the Rain.
https://www.facebook.com/leprousband/
OAK (Friday June 7th)
Following the release of their second album “False Memory Archive”, OAK has taken a big leap towards the front of the Norwegian prog scene. In addition to being booked to Close to the Rain, the band is scheduled to play Night of the Prog 2019, one of the biggest genre festivals in the world. With a sound that can draw references to acts such as Talk Talk, Pink Floyd and Steven Wilson, and boasting members of the Airbag and Bjørn Riis live bands, Oak is definitely one to watch!

LUCY IN BLUE (ISL) (Friday June 7th)
Lucy in Blue is a psychedelic progressive rock band from Iceland who gently coasts on the turbulent sea, exuding the fickle stillness they find amidst the unforgiving gale of the human condition. Their second album "In Flight", released this spring, has gained them many new fans – and rightfully so. It was released at the Roadburn Festival in Tilburg (NL) to massive acclaim. This show is their very first in Norway.
https://www.facebook.com/lucyinblue/
SWIFAN EOLH & THE MUDRA CHOIR (Friday June 7th)
…is a new band from Norway, continuously busy discovering their unique kinds of brew, mixing elements of rock, jazz, psychedelic, progressive etc. Founded in 2015, the band just released the debut album “The Key” (2019) on Apollon Records Prog to great reviews.

PANZERPAPPA (Saturday June 8th)
…have since their formation in 1998 become an institution in the Norwegian prog-rock scene. Due out with their seventh album “"Summarisk Suite” on the 3rd of May, the band describes their music as “Progressive Rock with a friendly face", reminiscent of inspirational precursors such as Samla Mammas Manna, King Crimson, Henry Cow, Univers Zero and Frank Zappa, while at the same time sounding unmistakably… Panzerpappa!

THE WINDMILL (Saturday June 8th)
…is a Norwegian progressive rock band formed in 2001 in the outskirts of Oslo. Musically, the band can best be described as symphonic neo prog, influenced by several bands from the golden years of the seventies, such as Genesis, Pink Floyd, Camel and others.
Their debut album "To be continued …" was released May 2010, and the followed up by "The Continuation" in 2013 to great reviews around the world. 5 years later, 2018 saw the birth of "Tribus" to great acclaim from fans and critics. In addition to seeing The Windmill at this years Close to the Rain, they can be seen at Summers End, the UKs longest running prog-festival.

AIRBAG (Saturday June 8th)
Fresh back from the floating Caribbean festival Cruise To The Edge, AIRBAG returns to Bergen. This time with an exclusive set marking the 10 year anniversary of their debut album “Identity”. On CTTR the band will perform the album in its entirety.

SOFT MACHINE (UK) (Saturday June 8th)
Legendary Canterbury group Soft Machine will headline our festival on the Saturday.
Today’s version of the group are Roy Babbington, John Etheridge, Theo Travis & John Marshall – all flying high on the success of their excellent comeback album "Hidden Details" from 2018! (Art Themen will be playing saxophone while Theo Travis will be on tour with King Crimson for the Bergen show.)
Please note that the band will play first on the Saturday and will start at 1900.