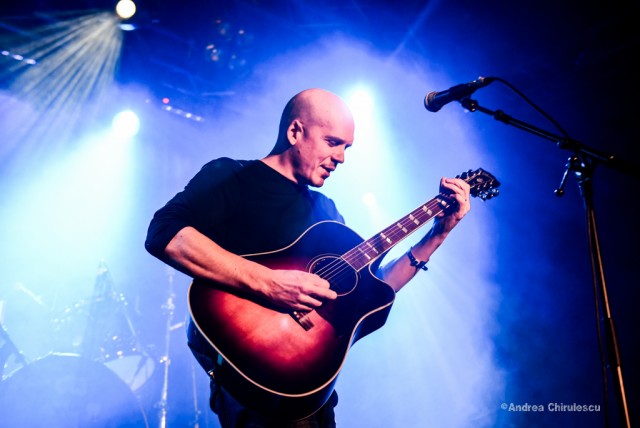 DEVIN TOWNSEND  – acoustic live at by:larm 2018
Photo by Andrea Chirulescu
Among the great names brought to Norway by Radar Booking, Devin Townsend is one of those who instantly makes me purchase the ticket when the shows get announced. Especially when you find out it’s going to be an acoustic one, in a small venue – meaning an intimate setting – and as bonus it will contain a Q&A session. I did see Devin live a fair amount of times and I must admit that while others might complain about him talking too much between songs, I’ve never seen the problem in that, since he briefly touches subjects that I, myself, am fascinated about. So an evening with Devin Townsend talking more than usual was something well worth paying for.

The Edderkoppen scene was fitted simply with a microphone stand, a chair, two acoustic guitars, a couple of monitors, a laptop and an owl on a cabinet, plus a big eyed plush unicorn ‘hidden’ inside the cabinet. And, eventually, Devin Townsend who greeted us by explaining the story of his baggy Indian pants acquired at a wedding in, well, India. These pants turned out to be quite the lait-motif of the evening, since a lot of jokes ended up built around them. Devin had to leave the stage rather soon as he realized his laptop is out of battery and he went to fetch the charger. This contributed to an extra amount of laughter and to the overall feeling of the evening that we’re getting to witness the ‘real’ (human?) side of an international artist, who, for the entire evening, acted simply like himself and without the dreaded superstar drama which might have been triggered by such an ‘accident’. Besides, at the end of the concert, we got thanked for helping Devin do this stuff for 25 years now. It’s always rewarding for me, as part of the audience, to feel that artists are aware of the importance of our support, however it might be expressed.

We were told that the choice for making an acoustic tour, with intimate concerts and no backing band, was fueled by Devin’s desire to present the audience his ‘stripped off’ music, or maybe the core of his music by taking it ‘back to the roots’, since he admitted that all of his compositions start with his voice and a guitar. There are some ‘simple’ acoustic songs on his albums and we got treated to a few of them, but the magic laid in hearing heavier songs and how they might have actually started. Stripped down of all the effects, intros, drums, bass (even if some of the missing elements got some acapella moments). Thank to this ‘silence’, the crowd ended up doing the choir part in ‘Life’, which turned out as the best concert ending ever.

I’m not even sure what to write about in the review to build an accurate image of how special the evening turned out, for me at least. Besides the beauty of the songs/voice and the skilled musicianship, getting to hear ‘Love?’ with guitar and voice only, the tears brought by ‘Ih-Ah’ and ‘Terminal’, I think the most important part was that we got treated with full and honest access to the brain behind the music. Both in the fact that we received detailed answers about technicalities on how music is made and how it works with getting the right tonalities in the songs, how synesthesia works for Devin, why he likes to use so much echo, or the struggles of touring and maintaining the quality of your voice, but also we got treated to insights into Devin’s brain. It was really fascinating to hear him explaining his thoughts process to us on how he went from one idea to another and ended up following none of them right there and then. How his various stages in life and thoughts at those stages in life can be found in songs, albums and how some of them might be seen today. We saw, like I said, the human side of the artist, without the bombastic show, just the person who admits that he’s actually struggling at times, that he has his insecurities and is giving away his experiences on how he overcame them, without making it sound like the supreme truth, just the way a person has found out throughout his life so far. I found that very inspiring. I actually found a lot of inspiration myself in a multitude of the songs released by Devin, small hidden life lessons that were very precious to me, but that evening made them feel even more genuine as they were constantly matched with all the stories and experiences we were told about. Another bonus was to hear Devin accompanying most of his in between song speeches/jokes with his guitar, even if I’m not able to tell if he was using this is a practise of the upcoming song or he was simply and naturally just improvising those parts. It was another kind of insight you don’t get access to in a regular concert setting. Oh, and we got to find out how a slowly landing butterfly ends up sounding on a Devin album.

The humor has been another factor which contributed to an awesome evening. Both between songs, during the Q&A session, but also during the performed songs, if there was room for a witty remark, a burp or a stupid joke, he would go for it. And without any restrains at making fun of himself, which probably is another aspect of Devin that makes him loved among his fans. Not sure how often you have attended a show (non stand up comedies and the likes) where the artist is almost constantly smiling and at the end of the evening your jaws can barely change to a non-smile look. But I know there should be more of these, because making people smile can as well be counted as a superpower.

The evening was supposed to be split in something like music, Q&A (people could have written their questions on a paper, prior to the show), break and then more music. The first part took place as intended, with Devin walking us through a good part of his 25 years career if I remember correctly. After the break, he admitted that it’s a bit awkward to come back into the same mood, so we got treated with a few minutes of us being asked to continue talking while he ‘warmed up’ again, strumming his guitar and ‘ignoring’ us. We found out how Devin’s childhood was influenced by musicals and got treated to an absolutely amazing performance of a Claude-Michel Schönberg cover of "Bring Him Home". We even got to hear the story on how Devin wants to make a musical, but how a big label didn’t really catch on the perfectly normal plot. Once the written questions had been answered, Devin started taking more from the audience, turning a good amount of time into cool and more personal conversations. He even discovered a guy who had attended the same wedding in India and who also had purchased baggy Indian pants. References to those pants followed him all evening!

Probably some of the clips from the show will turn up on various video sites, so should you be curious to hear the jokes and the answers as they had been told live, search them up on the wolrdwideweb. I am still wearing a big smile on my face as I type all these, remembering more of that evening, but I realize how wasted the jokes or the dialogues would be if I tried to take them out of the context and summarize them here. So I can only be grateful that I got to attend such a special event, and that my little Herman – the planet smasher – got his little moment of attention and made it inside Devin’s shirt (apparently for protection). If you’re the lucky owner of a ticket at any of the upcoming shows from this acoustic tour, you’re in for a lovely and unforgettable treat.