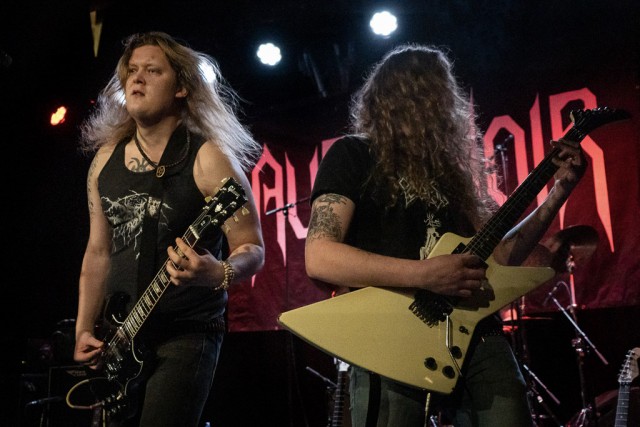 The end of 2018 saw both Aura Noir and Obliteration on a short European tour and luckily they extended that with some dates in Norway, including a snowy/rainy Friday evening in Drammen on February 8th. I’ve personally never visited Union Scene in Drammen, but I notice that lately Union Rock takes care of adding quite a cool number of events there, so I’m glad I finally got to attend one. Even if apparently I only witnessed the small stage, but it offered good enough conditions to make me consider to come back for other events.
OBLITERATION live in Drammen
Photo by Silje Storm Drabitius
Hailing from Kolbotn and having had recently released a fantastic album, "Cenotaph Obscure", Obliteration stormed the stage with their death metal, taking it into all extremities and skillfully blending in thrash, punk, speed or heavy metal. There’s never a dull moment with these guys, be it live or when you hear the recordings at your own leisure. The advantage of their live performances though is that you can also witness how skilfully they perform the madness of sounds and this time I got to focus my attention mainly on the bass playing, especially since where I stood, the bass sound was nicely distinguishable. As Cenotaph Obscure has brought the band a nomination to the Norwegian Grammy prize (known as Spellemann), the playlist found a good a way to mix in new songs with already known crowd’s favorites.

Aura Noir is also nominated to the same category at the Norwegian Grammy awards, with their full length ‘Aura Noire’ from 2018, which, as usual, was another insane release by the Norwegian trio. In Drammen we saw a bit of a lineup change, since Apollyon couldn’t cover the drum duty, thus allowing Kristian from Obliteration to perform twice this evening and bring his own twists to the sound of the ugliest band in the world. It’s never easy to put in words how ugly the whole musical experience is and how amazing at the same time, due its rawness and honesty. I have deleted and rewritten this part like 20 times until now and I still can’t find the proper words. So I’ll just give up and advice you, if you haven’t done it already,  go an watch Aura Noir live and make up your own mind. And then go watch them again and see if you agree with what you initially believed about them.