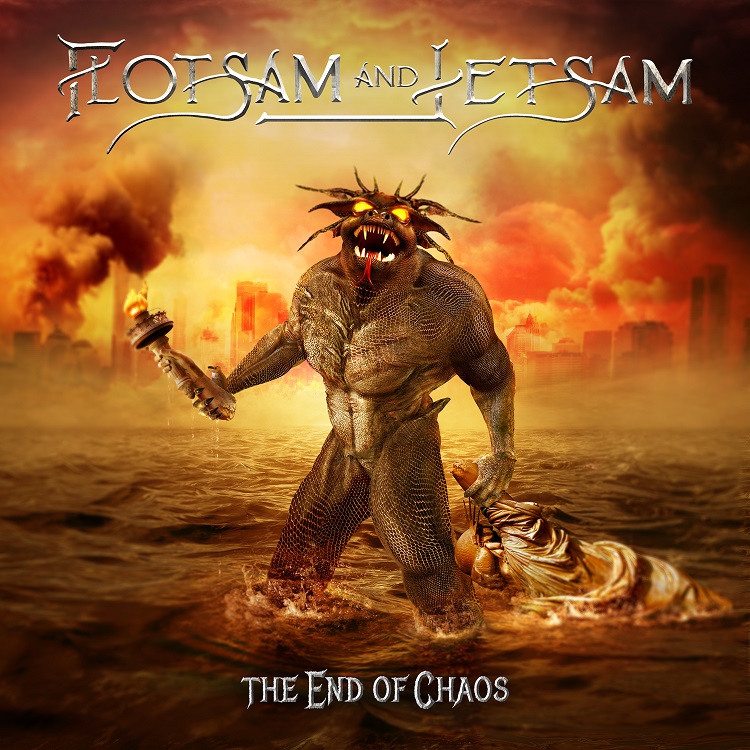 FLOTSAM AND JETSAM – The End of Chaos

"Flotsam" and "jetsam" are nautical terms, describing goods washed overboard by waves ("float some") or deliberately thrown overboard by a ship’s crew ("jet some"), but you probably only care that bassist Jason Newsted played in it before joining Metallica in 1986. Although their roots go back to 1981 they don’t predate Metallica but functioned as Paradox (1981-1982), Dredlox (1992-1983) and Dogz (1983-1984) before finally settling on Flotsam And Jetsam. Based in Arizona, the speed/thrash metal group today features vocalist Eric "A.K." Knutson, guitarists Michael Gilbert and Steve Conley, bassist Michael Spencer and drummer (so far exclusively to this album) Ken Mary, having recorded 13 albums in their career, including the subject of this review.

Seeing as I am only familiar with their previous eponymous record (2016), which was an excellent and memorable effort, I was really looking forward to hearing this new album when it came out, although, given the sheer volume of material that constantly spews from the giant metal wormhole (yep, metal is dead, all right) begging for a review just by being played, I just recently got around to reviewing it. Is the nearly 50-minute, 12-track "The End Of Chaos" worthy of its predecessor?

Not only is "The End Of Chaos" worthy of the eponymous record, with their recent output Flotsam sound like they got a new lease on life, to take nothing from the predecessor. While the eponymous was more groove and thrash oriented with melodies more nuanced and not so easy to spot right away, "…Chaos" brimms with melodies and harmonies this side of 90s Megadeth, while still firmly and basically a thrash metal record with plenty of traditional heavy metal. What’s more, some tracks are thrash/heavy metal hybrids without compromising melodies or Gilbert/Conley solo attacks as in one of the instant favorites "Control" where latter Anthrax-ian verse joins Biomechanical chorus and transition melody a’la Megadeth’s "Kick The Chair" or the Judas Priest-ly "Architects Of Hate" with a near death metal chorus. Flotsam made an excellent choice picking the fantastic "Demolition Man" where Prong-ic verses conclude with Kreator "Against The Rest"/In Flames "Dead Eternity" chorus (arguably the finest on the record) for a video single, but the Dio/Iron Maiden-ish "Recover" with a double chorus melody or the Trivium-ish "Survive" would have equally deserved the honors. Come to think of it, 5 perfect "hits" out of 12 songs ain’t too bad, is it?

Speaking of hits, you can’t have them without a good vocalist and Eric "A.K." Knutson is a beast, now Bruce Dickinson (Prisoner Of Time), now Joey Belladonna (Demolition Man) now Rob Halford (Snake Eye) now Biomechanical’s Yiannis "John K" Koutselinis (Control), who pushes his voice to the limits, most notably on the closer "The End" while proving himself one of the best vocalists speed/thrash metal has currently on offer.

With all the fanfare why just 5/6? As with Helevorn’s latest, the album seems to throw their best stuff in the first half, with the second half a little inferior in comparison, despite such scorchers as "Demolition Man" or "Survive". It seems the latter half contains more experimentation, such as the heavily Middle Eastern guitarwork of "Good Or Bad", where songwriting plays second fiddle to instrumental showmanship, or the very thrashy closer "The End" with the chorus so dripping of despair it sounds oxymoronic. Then, there are excellent but more formulaic tracks such as "Snake Eye" or the very Iron Maiden-ish "Prisoner Of Time", or songs more akin to the eponymous album where melody is great but scarce making you wish there were more amongs the excellent thrashy riffing such as "Prepare For Chaos" or the Megadeth-ian "Survive The Insane". And, as fantastic as "Demolition Man" is, the following "Unwelcome Surprise" tries to "cash in" on a similar In Flames-ian melody a little too much for my taste. There is nothing terrible here, by no means, but the flaws are more visible on the surface of the aforementioned "hits".

Judging, though, not merely from just these 5 songs, but from the record as a whole, Flotsam is an unstoppable speed metal thrasher equal the Testaments, Anthraxes and Megadeths of the world in terms of creativity, songwriting, skills, execution and, last but definitely not least, fantastic production courtesy of Jacob Hansen, clear, punchy yet powerful, where everything has its proper tone and balance.

I have yet to hear more than 2 out of their 13 albums but A.K. and Gilbert are right and "The End Of Chaos" is propably their finest hour, although this is hardly a compliment. The best compliment I can think of to sum up this record is Megadeth will have a hard time matching this and last year’s Diseased album, to say nothing of beating them to the punch. Or, a better one: Testament beware of THIS brotherhood of the snake.