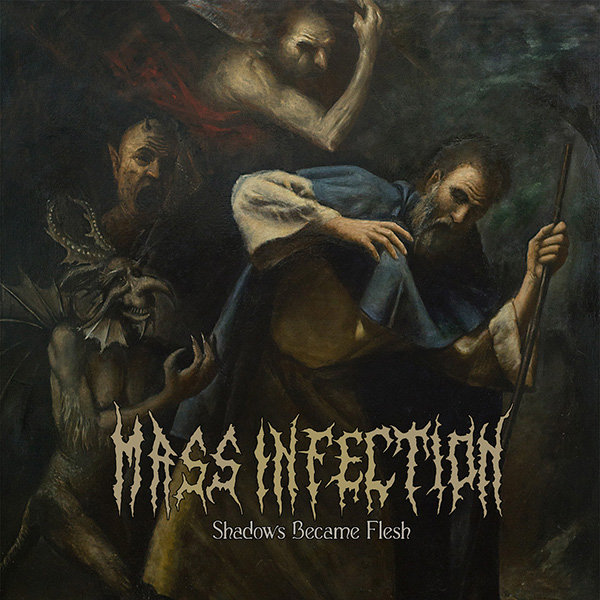 The Greek brutal death metal ensemble became flesh in 2003 and released their first album 4 years later. This here, "Shadows Became Flesh" is their fourth album, which was recorded as George Stournaras (vocals, guitars), Nick Lytras (guitars), John Kyriakou (bass) and current Hideous Divinity (phenomenal) drummer Giulio Galati. The 9 track, nearly 37 minute slab has been getting excellent reviews, Encyclopedia Metallum even scoring it a full 100%, which is very rare to see there. Should you believe the hype?

You should not believe the hype. "Shadows Became Flesh" is a good brutal death metal album somewhere among Behemoth, Hate Eternal, Nile, Hideous Divinity, Suffocation, Ulcerate and Morbid Angel but it is far from a genre perfection or a revelation it is heralded as, in part, because of production, which, while not too shabby, does seem to drown a lot of melodic aspects. Roughly half the tracks maintain a steady quality which resulted in the above score, but nothing is even close to the quality of Hate Eternal’s "I, Monarch" or Hideous Divinity’s "Adveniens", to say nothing of Behemoth’s "Demigod" or Ulcerate’s "Shrines Of Paralysis". (Ok, so not much METAL is anywhere near the quality of "Shrines Of Paralysis"). As for the other half, the short "The Merging Of Infinities" is probably the least interesting track on the record, incidentally after the most pointless one, a near 2 minute instrumental "Spiritual Entropy". Why wasn’t the instrumental just the end of the preceding "At One With Demon Dreams" instead of a pointless standalone track is beyond me.

Finally, there are two great songs which really standout from the rest, howbeit for different reasons. "Oath To Nothingness" is the only song that approaches the best Hideous Divinity, Hate Eternal, Behemoth or Ulcerate have to offer with memorable songwriting so catchy it sticks in your head right from the first spin. Had they used it for a standard on every track we would have something really great here. Instead, Mass Infection seems merely to inch their way toward that standard from track 1 to 3. True, starting the 4th track in question the songwriting seems to be improving, culminationg with the closing title track, the second standout, which is pretty good throughout but gets fantastically epic toward the end, bass suddenly wide awake and distict, as if they all waited until the last track to really shine like a beacon on the sea of above average.

Mass Infection’s 4th album does not necessarily disappoint but neither is it a death metal revelation. The skills and ideas are there but songwriting needs to be more memorable and engaging the listener consistently throughout.