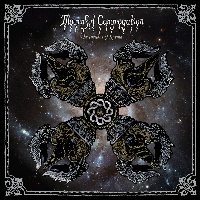 My first encounter with this Australian funeral doom metal outfit was "The Book Of Kings" (2011), although they have actually been around since 1993, having recorded just four albums in 18 years, howbeit while maitaining a fairly steady lineup which today consists of Damon Good (vocals, Bass, Rhythm & Lead Guitars, Keyboards), Justin Hartwig (Lead Guitars), Ben Newsome (Bass) and Tim Call (Drums). "The Book Of Kings" was just four tracks yet of considerable length, the last one at over 33 minutes of music in the vein of Mar De Grises, Ahab, Esoteric and Swallow The Sun but the Aussies had definitely their own oppressive style. While I missed "Concrescence Of The Sophia" EP (2014) I cought the newest offering, "The Incubus Of Karma", quite early in 2018, just never got around to reviewing it then and have just recently managed to do so. How does it compare?

For one, while "The Book Of Kings" could rightly be subtitled after its first track, "Catechism Of Depression", "The Incubus Of Karma" is focused on the totality of the human condition, which, much like the album title, is an oxymoron, a contradiction (like our lives!) when you consider that incubus is a male demon sucking the life out of human female sexual partner during plateau and karma is the ancient idea in many spiritual traditions based on the law of sowing and reaping, being repaid back for thoughts and deeds we send out into the world, whether good or bad, either just in this life, or, if you believe in reincarnation, throughout countless lives we supposedly live. "The Incubus Of Karma" is, then, all around deeply emotional and spiritual sonic, if not even visual (!) experience with depression always answering with hope and hope always resulting in enlightenment.

Listening to the Daylight Dies "Dismantling Devotion"-inspired (one of my all time favorite metal compositions) opener "The Indwelling Ascent" through the favorite "Whispering Spiritscapes", for instance, I am reminded of Romans 5:3-5, where "hardship produces endurance; and endurance, character; and character, hope and hope does not disappoint us, because the love of God has been poured out into our hearts" (REV), as Damon Good has, essentially, the same message lovingly proclaiming as if with the very voice of God to man, "My child, you are receiving the primal matter/Understand the blindness and the dejection of your first condition", appropriately "Lost Paradise/Gothic" Gregor MacIntosh’s (Paradise Lost) guitar Good/Hardwig melodies exchanging one for another in constant interplay amidst Good’s horrifying growls and Tim Call’s drums sounding like Metallica’s Lars Ulrich on "Master Of Puppets" all of which becomes more of a My Dying Bride-ish near slow death metal experience on the curiously church organ-introed "The Rubaiyat". Consider the gargantuan Daylight Dies-esque closer "A Picture of the Devouring Gloom Devouring the Spheres of Being" with over 22 minutes of melodies galore with the final one so heartrending yet hopeful I cried twice while listening to it or "Scripture of Exaltation and Punishment" heavily recalling Swallow The Sun’s "Empires Of Loneliness" though without the same oppressive hopelessness and, surprisingly, the title instrumental track journeying through progressive overtones of Fish’s Marillion. There’s much to explore here and having been exposed merely four times I fully realize I have barely scratched the surface of what truly is on offer, all with a fantastic, clean yet powerful production and mix whether reproduced outward or inward.

"The Incubus Of Karma" has, in my view, only one flaw: it is so vast, so complex and so long (nearly 80 minutes!), with the tracks, though with peaks and valleys, ebbs and flows within nearly each track, following generally the same pattern, as if there was a madness to this method, not the other way around, that these hypnotic and psychedelic overtures can lul both body and mind to sleep, in this sort of trance that Tibetan Buddhist monks can achieve through prayer and meditation whereby your consciousness seemingly slips away (in truth, you actually become MORE conscious) and you have to rewind and re-listen to give a fair assesment. Admittedly, this trance is very relaxing and uplifting, like a pleasant epic dream you don’t ever want to wake up from, the state of both non-existence and the truest presence or as if you ceased to exist but from the inside of a whirlwind of simultaneously hopeless and hopeful current or energy. This curious state is something I also get from Descend Into Despair’s "The Bearer Of All Storms" or Mar De Grises’ "Streams Inwards". Now, that I dressed this idea in words, I am only partially persuaded that this an actual flaw, but still, I am comfortable with the score.

"The Incubus Of Karma" is an excellent record, a tremendous achievement that, while certainly a masterpiece, feels a little overextended. Of course, you can always call me a funeral doom layman and you are free to do so, but, in any case, I highly recommend this disc if you love beautiful, melodic, hypnotic, deeply spiritual and emotional music.