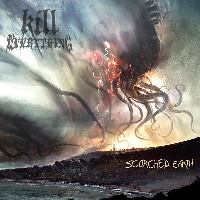 Not much is known of this Texan brutal death metal outfit formed in 2016, besides that "Scorched Earth" is their first and only release, if you don’t count the single "Carnivorous Lunar Activities" (2016) that is, and that the band is comprised of Shane Newbrough (drums), guitarist Brian Wynn (also of Devourment), Jeff Huffman (bass) and Weston Wylie (guitars, vocals). Given the scarcity of information and the fact that these guys don’t even have their own bandcamp page, what sort of experience can they offer to the brutal death metal a maniac?

Well, in short, not a very insightful and compelling, although, admittedly, a very well produced one. While the opener "Kill Everything" dazzles with surprisingly good songwriting, fast ultrabrutal riffs "Concreto" Fear Factory style with Meshuggah/Skinless/Dying Fetus feel to it, and "Scorched Earth" (yes, 1,2 tracks are band name and album title, respectively) is shorter and more Obituary-ish, already "Intrinsic Vexation" reveals the glaring flaw of this album – fragrant lack of variety. Sure, "Bereft of Humanity" has some cool Deceased "Mysterious Research"/Obituary "World Demise" groove but "Thermal Liquidation" can hardly even be called a song, as we realize we are already more than halfway down the road just in time for the two worst tracks, "It’s a Wonderful Knife" and "Laid to Waste". Only one more track is left and "Carnivorous Lunar Activities" is just technical ridiculous proficiency just barely listenable at times that at 3:00 reminds me of those short noise instrumentals on Nailbomb’s "Point Blank". Everything is killed and the earth scorched in a little over thirty minutes and my life is not altered in the slightest by this disc.

Kill Everything and "Scorched Earth" bring nothing new to the table, as well produced and flawlessly technically executed as this album may be. The problem is obvious: the songwriting is practically non-existent and we are treated to eight helpings of endless riff salad, although, admittedly, the opener could be even called a song proper. Moreover, this music is hardly unique, as both Dying Fetus (big time!) and Skinless (less) are being constantly mined for ideas.

The disc deserves a fair 3/6 but, given my soft spot for debutantees, I added half a point for showing up to and willing to work. Hopefully, the Texans will get the hint and improve the songcraft for the sequel, because stick it to the last two Skinless albums, and you see how generous I am here.

ALL THAT REMAINS – Victim Of The New Disease