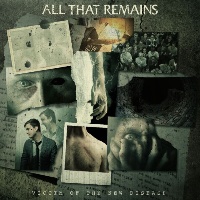 ALL THAT REMAINS – Victim Of The New Disease

The Massachussets-based metalcorers All That Remains formed when Philip LaBonte left Shadows Fall after "Somber Eyes To The Sky" (1997) which ATR’s debut, "Behind The Silence And The Solitude" (2000) stylistically echoed but it was the universally acclaimed fantastic "This Darkened Heart" (2004) which really showcased their abilities, with the fabulous melodeath/metalcore musicianship no small thanks to the recently tragically deceased founding guitarist Oli Herbert, some comparing All That Remains to Metallica 1984-1986, one of the best known compliments a metal band can receive. I also loved "The Fall Of Ideals" (2006), despite a more stripped down approach and with Phil fully embracing his clean vocals and fondness for Killswitch Engage-sque patterns. The next two albums, "Overcome" (2008) and "For We Are Many" (2010) significantly departed from melodeath for simpler and spotty while predominantly non-catchy generic metalcore songwriting and, desperate to stand out from the pack, ATR steered into hard rock territory on the mediocre "A War You Cannot Win" (2012), ironically, to the point of almost total loss of identity, an album LaBonte himself later profusely criticized. Worse yet, while Phil (who’s almost exactly my age) has always been pretty conservative, views seemingly advocating Glenn Beck-inspired domestic terrorism seemed shocking from the same intelligent and compassionate man who once wrote "I will not give in to fascist beliefs and I am not a fool/I will let not pride destroy me" on "Weak Willed". "The Order Of Things" (2015) eased out on the Tea Party rhetoric but suffered from borderline personality disorder, seemingly back to the roots but essentially hard rock in metalcore clothing, with few things actually standing out for memorability, to boot. Finally, "Madness", a chaotic concoction of deathcore, nu metal, hard rock and even dubstep (!) marked the lowest the band has ever descended, as pretty much everything, especially the lyrics, has become so crude and base with Oli Herbert suddenly as essential as guitarist Marty Friedman on Megadeth’s "Risk". Thankfully, La Bonte saw through the impending doom and thus "Victim Of The New Disease", coming out practically on the heels of its horrible predecessor, was going to be either the wake up album or the effort that finally and definitely would shut the toilet lid behind the once great and relevant outfit.

Alas, All That Remains chose wisely to truly come back on their 9th album to the sound of "The Fall Of Ideals" while liberally helping themselves to ideas showcased in Killswitch Engage’s "The End Of Heartache" and "As Daylight Dies", both of which I count among my favorite metalcore albums. In fact, if you don’t like the infectious earworms such as "Everything’s Wrong", "Blood I Spill", the favorite "Misery In Me" (somewhat echoeing Killswitch Engage’s "Take This Oath) or "Broken" you were never a fan. Especially, "Blood I Spill" seems to harken back to "This Calling", while Herbert FINALLY rules supreme, LaBonte allowing the man to breathe as a guitarist and songwriter. Best of all, ATR can sound like ATR while maintaining 100% memorability on all tracks, something they haven’t pulled off since "This Darkened Heart", with some of the most inventive vocal hooks since metal married hardcore (Just Tell Me Something, I Meant What I Said), as brilliant as "Two Weeks" or "The Last Time" but with much more firepower (check out the Panteric groove on "I Meant"!) Occassionally, too, interesting, if brief ambient atmospheric keyboard passages top off the tracks for more compelling transition (Wasteland, I Meant). Again, ATR pays tribute to one of their biggest influences, Soilwork, LaBonte channelling Björn Strid on the short title track with Herbert’s fantastic solo.

Then there’s Philip LaBonte. This album really proves he is one of the most skilled, disciplined, effective and versatile vocalists in metal, period. Some of the man’s views may be wrong, they may even be perverted, to quote Depeche Mode’s "Someone", but he can ‘core scream his lungs out like nobody’ s business (Fuck Love) while switching to low gutturals to make Chris Barnes (Six Feet Under) or Ross Dolan (Immolation) blush (Fuck Love), and when he REALLY sings, he can give Benjamin Burnley (Breaking Benjamin) or Aaron Lewis (Staind) or even Phil Anselmo (ex-Pantera) a run for their money (Wasteland) especially on the fantastic "Alone In The Darkness" recalling Pantera’s "Suicide Note Pt. I". And lyrically, too, he FINALLY presents something worthy of breaking out your reading glasses, which I will get to later.

Now, I liked all the tracks but that does not necessarily mean that I would not have loved a few more scorchers like "Blood I Spill" to balance out the more radio-friendly material, songs that the powerful opener, "Fuck Love", has all the ingredients for, as a song, though, love/hate thing with me. On one hand, it is undeniably the heaviest and the most crushing track on the album with some of the sickest vocals LaBonte ever uttered and a thrashy "The Gathering" Testament feel to the verses, on the other, those verses are interwoven with "Iowa" Slipknot rhythm we’ve all heard done to death and have grown tired of. Too bad, too, that the album opens up faded in with that sort of generic metalcore staccato found on As I Lay Dying’s "Beneath The Encasing Of Ashes" and that slightly altered staccato is used in lieu of a proper chorus, instead of just a breakdown toward the end, but a better different slower breakdown is utilized only once at the end instead of being played faster to match the verse and repeated twice as a chorus with eventual slower utilization, in the same way Machine Head did on "Aesthetics Of Hate", and that flaw makes the entire song sound more like a haphazard string of riffs than a song proper.

Slipknot being a point of reference, there’s no surprise, either, that the opener is laced with the kind of crude, vitupiration an irate rebelious teenager could write after school. I know ATR already broke the unwritten no profanity rule they shared with Killswitch Engage before "No Knock" (The Order Of Things) but it seems that time spent filling in for Ivan Moody (Five Finger Death Punch) live has rubbed off on LaBonte a little too much, especially with lyrical profanity right there in the title, something I’m never too fond of as both a music fan and a journalist. After all, we’ve all been there and either said these two words in our heads or out loud and we all get what Phil’s trying to convey, the futility of romantic emotional engagement, what with having just divorced a year ago (2015, in my case), so I question the necessity of such lingo use, since the man can truly write some of the most thoughtful stuff regarding the destructive power of negative psychological reinforcement (Misery In Me) or the dissillusion with this progressively godless (yes, I know Phil’s an atheist) fallacious world that surrounds us ever tighter while sqeezing every ounce of authenticity and innovation out of us (Just Tell Me Something) or on what sounds like the power of Stockholm Syndrome in victims of narcissistic abuse (I Meant What I Said) and all without a single invective, whereas we know he can both empathize and cope with all of us, so, again, why did he have to use such base rhetoric to boo(s)t?

In the end, then, "Victim Of The New Disease" is hardly a genre defining album, though, to say nothing of general metal defining work. However, I am still fairly satisfied with where ATR is right now, glad they’ve abandoned the hard rock and (mostly) nu metal leanings, even if they are flirting with deathcore now (Blood I Spill, Wasteland). All performances being top notch with a decent sound that gets massive in places, though, I am deeply saddened by the loss of Oli Herbert and seriously worried about the future of this outfit without him, because "Victims Of The New Disease" could have been a great start of the new wave of All That Remains whereas, instead, Oli’s suicide/murder (cross out the inappropriate) may now make it their swan song.

LORDS OF THE CEMETERY – Path of Damara