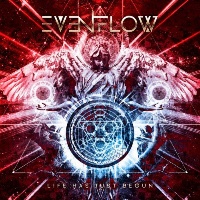 EVEN FLOW – Life Has Just Begun

Even Flow is a progressive metal band founded in the late nineties by brothers Pietro Paolo (guitar) and Giorgio Lunesu (drums), says the band’s fb page. The band’s name comes from "the will of its members to express their real ideas and emotions", and NOT from Pearl Jam’s second track on their debut "Ten" album, as I initially thought. Gavino Salaris (bass) and vocalist Marco Pastorino complete the lineup. "Life Has Just Begun", their second album, I received as a physical CD promo and rightaway it sparked my interest since vocalist Marco Pastorino is the vocal/guitar/compositional mastermind behind the progressive/power metal band Temperance whose third album "The Earth Embraces Us All" I consider one of the best progressive metal albums in the 2000’s, one I gave 6/6 on this website, but whose most recent output, "Of Jupiter And Moons" I found underwhelming and disappointing in comparison, both albums, though, still a testimony to Pastorino’s vocal ability. Hence, to me, Even Flow is a next chapter in Marco’s musical evolution and a modicum of comparison with what he did in Temperance.

Interestingly, "Life Has Just Begun"bears some similarity to Temperance and not merely in vocals (since Marco does not play guitar here) but is ultimately much more progressive, indeed, hardly a power metal album. It could be said, then, that to certain extent, Pastorino treads different waters. After all, it is brothers Lunescu whose vision is realized in Even Flow. The best example of what they are capable of is the favorite "Azure Haze" where Dream Theater/Marillion keyboards interplay with guitar Helloween-ic chorus, fantastic solos and where Pastorino shines as a vocalist, especially toward the end where he passionately screams almost a second chorus in a bitter dirge-like tone "you’re mean/miles away/I carry on my dreams/your greed/you will pay/I carry on". The following, "Believe" is slightly less impressive but still very enjoyable with added Megadeth-ian flavor and solos rivaling Michael Amott (Arch Enemy) and Marco hopefully crooning "I believe with all my heart we could save our love". Before you think Even Flow is a new romance soft radio rock oriented construct listen to the genuinely heavy "Alternative State Of Mind" with keyboards/guitars resembling Sadist which in no way destroys its Deep Purple-ish tone or "Awake" Dream Theater-inspired fantastic "Oblivion" to say nothing of Omnium Gatherum-ish overtones of "Mystical Inside" or the closer "Seasons Never Change" with acapella vocalizations a’la Queen’s "Bohemian Rhapsody". Even Flow lives and breathes both progressive and metal, with the second half of the disc slightly better than the first.

On that last point, "Life Has Begun" suffers from a couple of lesser tracks, namely 1 and 2, tracks which seem mere afterthoughts of the creative process. The Evergrey-ish "Secret Prayer" is incredibly cheesy lyrically (bye bye you can see the sunshine/bye bye you can leave it all behind?) and musically and, the bigger offender, "Come To Life", sounds as though Even Flow forgot to adorn it with a proper chorus. In fact, if you wanted to bye bye leave them behind (pun intended) and start enjoying the album from the third track, the fantastic "Azure Haze" you’d had a much better experience, throughout and overall.

"Life Has Just Begun" is an excellent album from very skilled and creative musicians but the two underwhelming songs, especially being openers, slightly detract from the enjoyment of this disc. Hopefully, on the third album, Even Flow will present a more well-rounded experience worthy of higher scores.